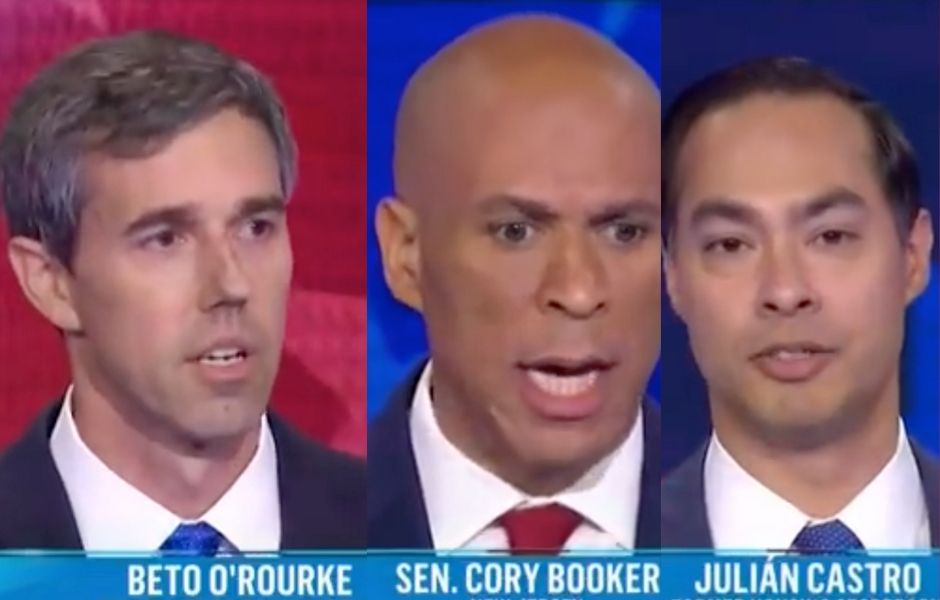 Every year it feels like you can hear more and more people speaking Spanish across the country, and these days that includes presidential candidates on the debate stage.

So far, a number of Democratic presidential candidates — Cory Booker, Pete Buttigieg, Julián Castro and Beto O’Rourke — have used Spanish during the primary debates. And at last week’s debate, moderator Jorge Ramos kicked off the evening with a message for Latinos in English and Spanish, “sepamos que este tambíen es nuestro pais…this is our country too.” The audience responded with applause.

Since the first debate this election season, there have been lots of opinions shared about whether the use of Spanish is appropriate, would it help some candidates or hurt them, is it pandering, and the like.

Political pundits and late-night talk show hosts all weighed in. But all of these arguments miss the larger point.

While it is important to acknowledge that using Spanish during the debate is a symbol of respect, particularly given the audiences in Miami and Houston, the substance of a message matters more than the language one uses to communicate it. And that’s particularly true for Hispanic voters.

To start, it’s important to understand the Hispanic electorate. As of 2017, there were 59 million Hispanics in the United States, or 18 percent of the population, and nearly 40 million Americans spoke Spanish at home. And Hispanics are on track to be the largest racial or ethnic group to be eligible to vote in a presidential election, according to the Pew Research Center.

While the use of Spanish may win candidates some points with these voters, this alone is not enough to win the Latino vote.

In a recent poll conducted by Latino Decisions for UnidosUS, the largest Latino civil rights and advocacy group in the US, 76 percent of the Latino eligible voters surveyed said they mostly wanted a candidate who values diversity and brings people together. Only 2 percent thought that the ability to speak Spanish was the most important trait for a president. Latino and non-Latino voters alike may appreciate the gesture, but that is not what matters most.

Latino voters are issue voters, they want to know a candidate’s stance on issues – particularly the ones that affect them, their families, and their communities.

According to a nationwide survey, that includes lowering the costs of health care, stopping Trump and the Republican agenda, and protecting immigrant rights and stopping racism against immigrants and Latinos. Jobs and the economy, as with most voters, are also consistently top-rated issues for Latino voters.

These issues are typically ones where Latinos face additional hurdles. For example, Latinos continue to have the highest uninsured rates among racial or ethnic groups, although the gap appears to be closing.

Few healthcare systems, even those in areas with large Latino populations, have invested in services targeting Latinos beyond language services. While Democratic candidates debate about universal healthcare versus an expansion of the Affordable Care Act (Obamacare), we rarely hear about the need for bilingual, bicultural providers. The advantage of having access to healthcare is significantly diminished if things get lost as healthcare professionals are not prepared to maneuver cross-cultural communication.

Julian Castro spoke indirectly to this point. He said, “You know, I grew up with a grandmother who had type 2 diabetes, and I watched her condition get worse and worse. But that was while she had Medicare. I want every single American family to have a strong Medicare plan available.” This is a familiar story in many Latino households, and likely resonated with those viewers.

It does not matter if you speak to Latino voters in Spanish if you are on the wrong side of these issues. What matters is whether you and your policy preferences take into consideration Latino perspectives, experiences, and preferences.

Of course the Latino electorate is not one unified group, but there are certainly clear policy preferences within Latino communities.

In the end, whether you say gracias or thank you, sí or yes is irrelevant if that is all candidates are going to say. There is a spark of hope, however.