Latina Lista: News from the Latinx perspective > Columns & Features > Guest Voz > Harvey flushes out the inequities of a society stacked against the most vulnerable 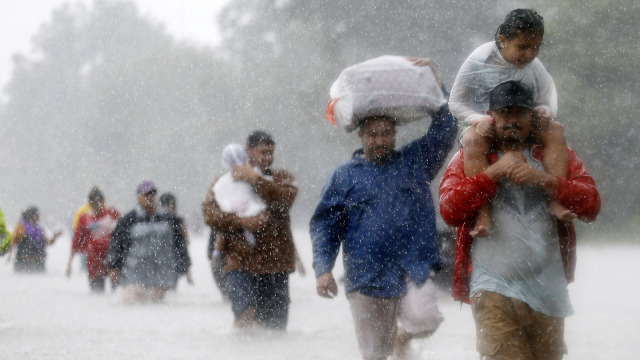 Without a doubt, Hurricane Harvey is a historic catastrophe. After making landfall Friday and becoming a tropical storm, it has continued to wreak havoc: death, loss, missing persons, and an immediate and lingering fear among many communities. I have firsthand experience with devastating hurricanes, having lived in the path of the storm when Hurricane Andrew hit Miami in 1992.

Andrew came on shore as a powerful Category 5 hurricane—the highest on the scale. Communities were literally wiped out; people lost everything, and lives were lost.

Still, the day after Andrew hit, we had something in Miami that Southeastern Texas has not had: sunshine. Clear blue sky days that allowed us to get to the task of cleaning up and “recovering” almost immediately. While we lacked power and water for weeks and had only remnants of our former homes, we could get outside and get back to the business of rebuilding. Texas has not been so lucky.

Like Andrew, Harvey was a devastating hurricane which left coastal damage from strong winds, ocean surge and rain, but unlike Andrew, Harvey has punished Texas with almost non-stop rain dropping at least 21 trillion gallons of rain.

The images of human suffering are tragic. The stories of survival and rescues by average citizens, are heartening. People have lost their lives, families have been forced out of their homes, some have been separated, and thousands are left wondering “what happens next.” Even emergency shelters have begun to flood and more flooding is expected. Cleanup and rebuilding is likely to take years.

Hurricanes like Harvey pose an immediate and long term threat to public health from infectious diseases, to water contamination, more pollution, power outages, mold, economic and job disruption, and mental stress. For vulnerable people like children, the elderly or people with health problems, these impacts are even more serious. Access to health services, food and needed services is limited potentially exacerbating existing conditions, and rescue and rebuilding brings its own set of injuries and illnesses.

Even without flooding, being displaced from one’s home disrupts our psyche and makes us feel vulnerable. Loss of a home also poses challenges for work and school as well. For low-income communities, these impacts are even more severe and lingering.

Some of the hardest hit communities by Harvey are low-income, communities of color, like the community of Harrisburg/Manchester, where 97 percent of residents are people of color, and 37 percent of them live in poverty. Even those not “officially” living in poverty are affected by other environmental injustices that are only exacerbated by disasters like these.

One study by TEJAS and the Union of Concerned Scientists, found that 90 percent of the population in Harrisburg/ Manchester lives within one mile of an industrial facility—many of which have already been reporting hazardous chemical releases, as oil and gas facilities damaged by the storm have released more than two million pounds of dangerous chemicals like the cancer-causing benzene and nitrogen oxide which can cause problems such as wheezing, coughing, colds, flu and bronchitis, adding new health threats to Houston’s woes.

Low-income renters are also especially vulnerable group facing the loss of their homes and belongings with little recourse. Furthermore, the recovery and rebuilding of low-income rental housing will be the most difficult yet most critical task of recovery for a region with such high rates of poverty and inequality. For low-income impacted communities, the road ahead will be long.

Texas is also home to the nation’s second largest Latino population, 9.8 million. The Houston-The Woodlands-Sugar Land, metro area is home to 2,335,000 Hispanics, 36.4 percent of the population, many of which face economic and language barriers which make accessing aid and help challenging, if not impossible.

But by far those facing the most dire situation, are undocumented immigrants. Anti-immigrant measures by the Trump administration have caused fear among the Latino community and even among those with protected status under the DREAM Act now live in constant fear of deportation which in turn stands in the way of many seeking any help whatsoever, even if their lives are at risk. Most undocumented immigrants also fear requesting any type of aid for damages, leaving them with little to nothing and forced to start over.

So once again, it’s those among us who already have to fight to get ahead and out of poverty, those who already face discrimination, those who already struggle with illness, who suffer the most. While disasters themselves may not discriminate, but the way that we have developed our cities and our policies, and the way we treat millions of our fellow Americans, do.

We are all stakeholders when it comes to protecting our environment and as such it’s on us to make sure that we are all protected. Climate change is making hurricanes like Harvey more intense, wetter, and more severe. Warmer air holds more moisture, feeding more precipitation into storms resulting in more rainfall and increasing the risk of flooding.

Policies proposed by the Trump Administration that ignore the reality of climate change put us all at risk and put these communities directly in harm’s way and lives at risk, and the toll can be seen worldwide. In the US, the impact of climate change is now clear, costly and widespread. While it’s too soon to tell, Harvey will likely cost us hundreds of billions of dollars and an unaccountable amount of human impacts.

While no one storm can be tied to climate change, ignoring the fact that climate change and inequitable and non-sustainable development puts us at greater risk and is foolish and reckless. Only when we face the facts and stop our reliance on fossil fuels, start developing communities that are sustainable and livable for all, and stop discriminating by race and socioeconomic status in our planning, will we truly be able to protect our neighbors from future impacts and save, not sacrifice another slew of lives, hopes and dreams.

Adriana Quintero is executive director and founder of Voces Verdes.

Beaumont, climate change, environment, Houston, Hurricane Harvey, low-income
Previous Post What is the online equivalent of a burning cross?
Next PostDHS Memorandum outlines steps to be taken with DACA recipients

What is the online equivalent of a burning cross?
Comment
DHS Memorandum outlines steps to be taken with DACA recipients