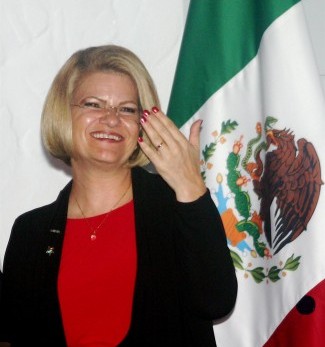 As the crow/seagull flies, it’s almost 200 miles between Point Mugu and Paso Robles.

In between what is almost Ventura County’s southern border at Point Mugu and San Luis Obispo’s northern frontier near Paso Robles, lies a growing Mexican national population in need of a wide variety of services.

This large territory is just one of the challenges that awaits Ana Berenice Díaz Ceballos Parada, who has begun her service as the new Mexican cónsul based out of Oxnard.

Limited funding to expand services to the region has hurt past efforts to provide for the needs of the community.

During Díaz Ceballos’ official reception held June 13 in Santa Barbara, former Oxnard City Councilmember Andres Herrera asked her to consider holding two-day weekend mobile consulate services in Santa Maria and elsewhere in region because of the difficulties of losing a day of work in agriculture and other jobs on Saturdays.

“We are very aware of the hardships they face when they are not earning wages when they have to go see the consulate,” said Díaz Ceballos, adding that the consulate will seek to get more funds from the Mexican federal government to expand mobile consulate services. “And I will personally attend as many of these events as possible.”

Herrera has a keen interest in the issue. He is one of two individuals from the 805 region serving as volunteer members of the Consejo Consultivo del Instituto de los Mexicanos en el Exterior (CCIME), the Advisory Council to Mexico’s Institute for Mexicans Abroad (IME).

“They have mobile consulates up to Santa Maria and both Martinez and I recognize the need for greater services,” Herrera said. “We advise Mexicanos en el Exterior of the kind of things needed for the residents and we’ve been talking to them to increase the budget to provide greater service for the outlying areas.”

Herrera agrees that the region’s sheer size is a major challenge.

“You are talking about three counties and that is a tremendous amount of territory and people to provide consulate services to,” he said.

CCIME is independent and does not work for Mexican consulates in the United States.

“We provide consulting services so when we see shortcomings, it’s not because they don’t know how to do it. It’s because they can’t accomplish all they need to,” Herrera said. “They have to have better resources.”

Herrera and other members recently met in Puebla, Mexico with Arnulfo Valdivia Machuca, director of the Institute for Mexicans Abroad (IME).

“We spent four hours talking with Dr. Valdivia about the strengths and weaknesses,” said Herrera, who believes Valdivia will take the members’ message to increase funding to the highest levels of the Mexican government…

California, Mexican consulate, Ventura County
Previous Post New book dishes up a plate of culture and tradition wrapped in a breakfast taco
Next PostGuest Voz: We are a better society when people are not quiet — Standing up for Trayvon Martin

New book dishes up a plate of culture and tradition wrapped in a breakfast taco
Comment
Guest Voz: We are a better society when people are not quiet — Standing up for Trayvon Martin