Latina Lista: News from the Latinx perspective > Local News > South > Changes in Demographics in Austin brings diversity challenges to the forefront for educators

When most people think about Austin, Texas, the images that come to mind include, the State Capitol, The University of Texas at Austin, outdoor food courts, music festivals like South by Southwest and Austin City Limits, BBQ, beer and a city with lots of opportunities for young people.

What does not come to mind when most people think about Austin, Texas is the presence, participation and performance of the Hispanic community. For example, most people do not know that Austin, Texas leads the state in the number of publications targeting the Hispanic community. Today there 13 newspapers being distributed in Austin which can be found in restaurants, taquerias, government offices and other places with high pedestrian traffic. 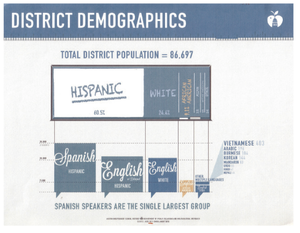 Most people do not realize that Austin, Texas has become the city of choice for a growing number of wealthy Mexicans fleeing the violence in Mexico. Most people do not know the Greyhound bus station in North Austin shares the marquee with another bus company called Americanos which serves a largely Hispanic cliental.

Alex Sánchez, the Executive Director of the Austin Independent School District’ s Department of Public Relations and Multicultural Outreach has been conducting in depth analysis on the Hispanic community over the last 13 months and has found a number of interesting items.

When asked about home country, 89% claimed Mexico as their country of origin. The Mexican state of Guanajuato led the list of sending states followed by San Luis Potosi, El Estado de Mexico, Coahuila and finally Guerrero.

With respect to their own education the participating parents in the surveys stated that 23% of them had a high school education, 37% had made it to middle school and 31% had only an elementary education.

While the participating parents in this survey lived all over the school district, they were concentrated primarily in 11 zip codes. The third graphic in this story shows the distribution in this regard. As can be seen, a large number were from Northeast Austin in the zip codes 78723, 78752 and 78758. These zip codes contain Lanier and Reagan High Schools. The second area with the most survey participants were zip codes 78741 and 78744. These zip codes contain no high schools and students go to high schools in 78704 (Travis High School) or 78745 which has Akins High School.

The last panel in this presentation shows that the total student enrollment in 2011 for the Austin Independent School District was 86,697. The Hispanic enrollment was 60.5% or 52,451 students. The White student population came in at 24.4% or 21,154 and the African American enrollment represented 9.1% or 7,889 students. Students from Vietnam, Korea, Nepal, and other countries make up the rest of the student enrollment in the school district.

With regard to language, the Hispanic student population can be partitioned into two parts, those who are Spanish dominant and those who operate in both English and Spanish. Based on enrollment data, approximately 30,000 students in the school district are primarily Spanish speakers while close to 20,000 are bilingual. Stated differently, Whites who speak English are the third largest language group in the Austin Independent School District.

In June of this year, the AISD Department of Public Relations and Multicultural Outreach launched a radio program called EDUCA in order to communicate more effectively with Spanish speaking parents. The program airs on the weekends and is hosted by Alex Sánchez. According to Arbitron data, the show has been heard 53,700 times thus far. In a separate survey of 4,361 Spanish dominant households, respondents stated they would listen to the program in the near future.

What this story underscores is the great diversity that exists in the Austin Independent School District and the attempts that are being made to both understand its changing dynamics and communicate effectively with the parents of the students.

Changing the voting messaging: It's your duty!
Comment
Guest Voz: Latinas Hold the Power and Potential of This Nation’s Future