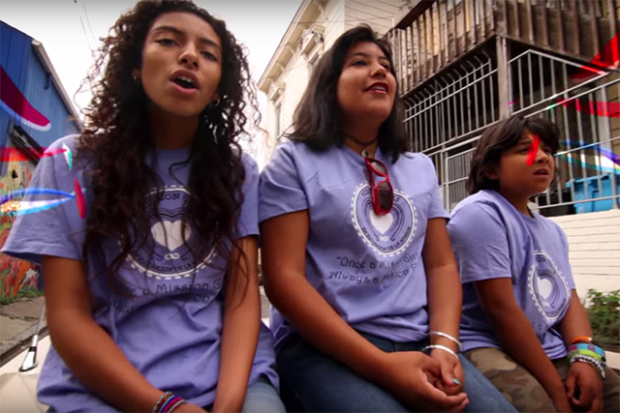 But here they are. Ana and Sarahi are spitting verse alongside pro hip hop artist Adam “A-Plus” Carter (of Hieroglyphics fame), carried by Eliseana’s smooth vocals. They come together in “We Are the Women,” a song  Alejandra Rodriguez, a veteran Mission Girl, co-produced.   No matter that, by her account, she doesn’t write or sing, and doesn’t even talk unless she can avoid it.

“We’re giving a voice to young girls who never ever had any kind of studio experience but they have a lot to say,” said Mission Girls director Susana Rojas.

The track is a collaboration between the nonprofit program Mission Girls and Future Youth Records, a label that produces and promotes songs with a message.  Sarahi, Eliseana and Ana were coached through the experience by professional recording studio staff, but also by A-Plus and former American Idol competitor Thia Megia.

When it came time for the “agony” of picking a handful of the dozens of young women the nonprofit serves every day, Rojas said these girls stood out.

Sarahi, Rojas said, came to her after the release of Nicki Minaj’s highly suggestive music video for the song “Anaconda”. The 11-year-old was appalled.

“What happened to her? She’s talented. Did she forget that she’s a woman too?” Rojas remembered Sarahi asking.