Latina Lista: News from the Latinx perspective > Latino Politics > Congressman Gutierrez illustrates how Mitt Romney is out of touch with Latino issues

LatinaLista — Sadly, some of the GOP presidential candidates are still trying to show the extent of their conservatism to their political base by going on record saying anything — even when it insults a demographic that will someday soon be in the majority.

Mitt Romney and Rick Santorum have each conveyed their willingness to align themselves with harsh anti-immigrant views. 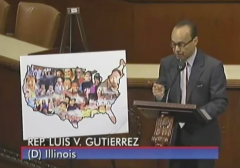 In response, Congressman Luis V. Gutierrez spoke on the floor of the House of Representatives this morning specifically addressing recent comments by GOP presidential candidate Mitt Romney that Arizona’s restrictive anti-immigrant law, SB1070, is a “model” for the nation.

As my colleagues know, Latinos are America’s fastest growing population.

So if you are a Presidential candidate, and you want to make sure that every single Latino in America knows you strongly oppose sensible and fair immigration reform, you have to work pretty hard.

It takes time and determination.

And a lot of us live in swing states. We are about 30 percent of the population in Arizona. About 25 percent in Colorado and Florida and Nevada. Indiana has 350,000 Latinos. Not so many, you say?

It is when you remember that President Obama only won Indiana by 26,000 votes in 2008 and his Latino support was the margin of victory.

The truth is, we’re growing everywhere. One-quarter of the children in America are Latino. 500,000 Latinos turn 18 and become eligible to vote every year. More than 50 million Latinos live in America. Most of us are citizens. 50 million is a lot of people to keep track of.

Especially if you want to offend each and every one of us.

To appeal to the most extreme elements of his party, last week he called Arizona’s harsh immigration law, “a model for America.”

But it’s a model for an awful lot of other things.

One, if you’re a politician, Arizona’s law is a model for how to achieve early retirement.

State Senator Russell Pearce was an author and lead sponsor of Arizona’s draconian anti-immigrant law. He talked about little else. His constituents weren’t pleased. So Senator Pearce became the first state legislator in Arizona history – the first in history — to be recalled from office. The biggest backer of Mitt Romney’s immigration “model” is now unemployed.

Two, if you want to wreck your local economy, Arizona’s law is a model for lost jobs and tax revenue.

The purchasing power of Latinos in Arizona in 2009 was nearly 35 billion dollars – billion with a “b.” One study estimated that undocumented immigrants alone paid 443 million dollars in local taxes. Another study estimates that Arizona would lose nearly 150,000 jobs if all undocumented workers were removed from the state, and local business groups have estimated that the law could cost the Phoenix area as much as $100 million in lost tourism and convention revenue.

Three, Arizona’s law is a model for how to energize Latino voters.

In 2004, George W. Bush received almost 45 percent of the Latino vote in Arizona for President. How did anti-immigrant Republican Jan Brewer do for Governor in 2010? More than 70 percent of Latino voters voted against her. In 2011, Hispanic voter mobilization led to the election of two Latinos to the Phoenix city council for the first time ever. In Daniel Valenzuela’s district, Latino voter turnout quintupled.

Four – and I’ll stop at four because my time in limited – Arizona’s law is a model on how to make decent people suffer.

Alabama followed the Arizona “model,” and a judge advised a woman facing domestic abuse that if she sought a restraining order against her abuser she would be asked to prove her immigration status and face deportation to stop the abuse.

And in both Arizona and Alabama, citizens and legal immigrants have been harassed or detained because they “look” suspicious or cannot immediately prove their citizenship status. I could go on about the human toll of this law.

Has an author who was kicked out of office.

Means lost jobs and tax revenue for everyone, not just immigrants.

Has mobilized Latino voters and pushed them away from the Republican Party.

And has caused good, hard-working people – immigrants and non-immigrants, documented and undocumented — to live in fear.

Maybe Mitt Romney and I have a different idea of what “model” means.

Maybe he thinks Bernie Madoff is a “model” investment advisor.