LatinaLista — How hard is it to get a photo ID?

That’s the question some people have been asking since states have been falling in line to require voters to present photo identification when showing up at the polls this November. 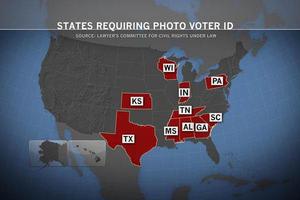 For the average person, it shouldn’t be hard. But for the person who has no ready access to transportation or to a facility that makes photo IDs or, in some cases, the money to pay for it, the burden is a big deal.

Each of these states is requiring citizens to produce certain types of government-issued photo IDs before being allowed to have their votes counted. The report identifies 11 percent of the population that doesn’t have a photo ID and for these folks getting one is a civic lesson unto itself.

1.2 million eligible black voters and 500,000 eligible Hispanic voters live more than 10 miles from their nearest ID-issuing office open more than two days a week. People of color are more likely to be disenfranchised by these laws since they are less likely to have photo ID than the general population.

Many ID-issuing offices maintain limited business hours. For example, the office in Sauk City, Wisconsin is open only on the fifth Wednesday of any month. But only four months in 2012 — February, May, August, and October — have five Wednesdays. In other states — Alabama, Georgia, Mississippi, and Texas — many part-time ID-issuing offices are in the rural regions with the highest concentrations of people of color and people in poverty.

Besides the inconvenience of traveling to a facility that isn’t in the neighborhood or has people-friendly hours, there’s the other part that drives home the point that these Republican legislatures who are pushing these Photo ID laws have a very undemocratic agenda.

More than 1 million eligible voters in these states fall below the federal poverty line and live more than 10 miles from their nearest ID-issuing office open more than two days a week. These voters may be particularly affected by the significant costs of the documentation required to obtain a photo ID. Birth certificates can cost between $8 and $25. Marriage licenses, required for married women whose birth certificates include a maiden name, can cost between $8 and $20. By comparison, the notorious poll tax — outlawed during the civil rights era — cost $10.64 in current dollars.

The report emphasizes that in these ten states that have the new voter ID laws, they account for nearly half of the electoral votes needed for either candidate to win the presidency. So, the notion that new laws would be passed to purposely disenfranchise and prevent people — who historically vote Democratic — from voting in November is something we would expect in a third-world country where voting isn’t a privilege of all citizens and democracy is determined by a select group.

Latina Cubicle Confidential™ Are You In a Family Owned “Cubicle”?
1 Comment
More Latinos among 6 million now not covered by changes to Affordable Care Act