LatinaLista — As much attention as is paid to the Latino vote, no one knows for sure just how much influence it will have in the November election. Some media organizations have pinpointed the states where the Latino vote could influence the number of electoral votes a candidate gets, but it’s still a big guessing game. 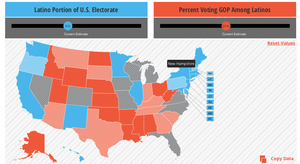 To take some of the guesswork out of it, America’s Voice and Latino Decisions joined forces to create a new site that tracks Latino influence in the 2012 elections. LatinoVoteMap.org lists state by state the electoral votes for each, for which candidate the state is leaning towards and even has a calculation of how many Latino voters plan on voting Republican.

As the November election draws nearer, more and more projections will be made about the Latino vote. In a way, this site is like a mirror that can do one of two things — show the reality of today’s Latino voter turnout or show the potential of what can be accomplished with the Latino vote.