LatinaLista — On October 25, in an interview with the editorial board of the Des Moines Register, President Obama foretold what would happen last night: 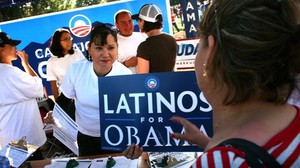 There’s no denying that Obama has Latinos to thank for his re-election. This afternoon, the Pew Hispanic Center released an analysis of exit poll data to show that Latinos voted for President Barack Obama over Mitt Romney 71% to 27%.

The analysis also found that more Latinas (76%) voted for Obama than Latinos (65%).