LatinaLista — The decision for whom to vote for in this election is a brain teaser for any undecided voter. Believe it or not, while a majority of Latinos, polls show, are leaning towards President Obama, there are some who remain undecided. 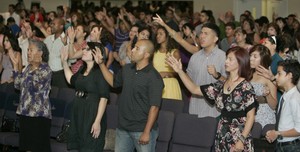 According to the Latino Religions and Politics Survey, it’s Latino Born-Again Christians who are the undecided likely voters in this election whose votes are still up for grabs. Pollsters for the survey, who polled only Latinos who were likely to vote, report that Latino Born-Again Christians make up 43 percent of all undecided likely voters nationwide and 56 percent in Florida.

The survey, conducted by Dr. Gaston Espinosa, a recognized scholar on Hispanic evangelicals, found that Born-Again Christians grew to 39 percent of all Latino likely Christian voters in 2012. Some other findings of the survey were:

Obama leads among Latino Catholics, Protestants, and Evangelicals, though with some defections

Overall, the survey seems to be a damning viewpoint of Obama’s policies and puts it in direct contradiction of other polls conducted among Latino voters. For example, in a Pew Forum on Religion poll, it was found that most Latinos support gay marriage. Yet, Latinos polled in this survey appeared to have a different viewpoint:

The survey found that a majority of Latino likely voters also oppose gay marriage (50% v. 30%), including Latino Catholics, Protestants by a ratio of 2:1, and Evangelical by a ratio of 4:1

But even with the obvious influence of religion on political opinions, the researchers admitted that one of the two candidates was more likely to win than the other.

Given that such a high percentage of Latino undecided likely voters are Born-Again and socially conservative, will a majority of them vote for Obama? Yes, probably, but it’s uncertain by what margin and if it will be enough to win key swing states like Florida and Colorado

Guest Voz: Former U.S. Ambassador to Mexico shares his thoughts on the election and U.S.-Mexico relations
Comment
Video: Latina filmmaker on mission to let women know they don't have equal rights under the law