Over sixty percent of Latino children at risk for pool drownings 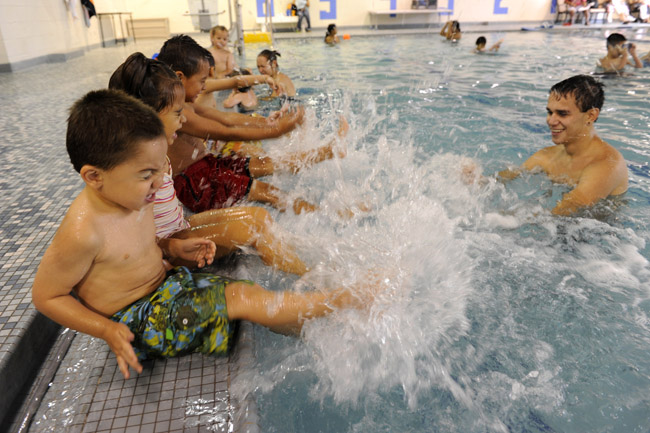 LatinaLista — Summer is only a couple of weeks away but already parts of the country are experiencing uncomfortably hot temperatures launching most kids into daydreams of flippers, sunscreen and swimming pools. For those kids who can swim, it’s just another summer of fun in the sun but for those who don’t, it’s a 50/50 chance that a cool pool of water or salty waters will be a deathtrap rather than an aquatic playground.

These high statistics are not new. Children of color have always lagged behind their Anglo peers in knowing how to swim and every summer this particular learning gap is highlighted with each new report of a Latino or Black child who has drowned. And every summer, pool safety advocates plead with parents to keep an eye on their children when in the water.

This year, two organizations decided to take a more direct approach to keep kids safe around water. The American Red Cross and U.S. Consumer Product Safety Commission (CPSC) have called for two things: All children need to learn to swim; and pool owners must fence in their pools.

A CPSC report issued today from the Pool Safely campaign reveals that children younger than age 5 represent about 76 percent of pool and spa drowning deaths and 78 percent of pool and spa injuries treated in emergency rooms in the United States. Government data also shows that African-American and Hispanic children between the ages of 5 and 14 are at a high risk of drowning.

With such odds stacked against Black and Latino children, why wouldn’t their parents get them into swimming lessons?

The answers are simple: Money, time, access and culture.

In Latino communities, the children who don’t know how to swim either come from low-income families who can’t afford even the slightest fee for classes or the parents are juggling jobs and crazy hours to be able to take time off to take their kids to lessons or pools aren’t in their immediate neighborhoods.

Those reasons are easy fixes. What’s harder to overcome is cultural fear of the water.

A 2010 swimming study by the University of Memphis found that 58 percent of Hispanics had little or no swimming ability and that Latinos usually skirted around the pool instead of stepping in — chalked up to the culture. The researchers also found that parents tended to pass down a fear of water to their children.

Whatever the reason, The reality that Latino and Black children are not learning to swim is finally being realized by city and state officials. Since Texas leads the nation in pool drownings, the state is making an aggressive push to alert parents about water safety. In Fort Worth, Texas a special coalition was formed in 2012 to prevent drownings, .

The Fort Worth Drowning Prevention Coalition offers ‘no-to-low-cost’ swimming and water safety instructions to children. Coalition members, who are seasoned swimmers, go where the children are, taking their equipment and materials by van. Already, they are making a difference in Fort Worth communities and have ambitious goals to carry their message of water safety to at-risk and underprivileged students — the exact target audience of children most likely to drown.

While the Fort Worth initiative is local, the Red Cross and the CPSC are promoting their national effort dubbed Pool Safely.

The website of the Pool Safely campaign features videos, state and local contacts for swimming organizations, guidelines for parents on how to keep their children safe in the water and is available in both English and Spanish.

Separately, the Red Cross offers two helpful online tools regarding drowning prevention. Together with the National Swimming Pool Foundation®, the Red Cross created an online course for pool maintenance to ensure accidents don’t happen and a free First Aid app that delivers instructions to your phone on what to do in case of emergency situations.

“Drowning is the leading cause of unintentional death for children younger than 5 and minority children drown in pools at an alarming rate,” said Inez Tenenbaum, CPSC chairman. “The lives of countless children can be saved this summer.

Editor’s note: The following video is a powerful recreation of a lakeside drowning and drives home the message that everyone needs to know how to swim.