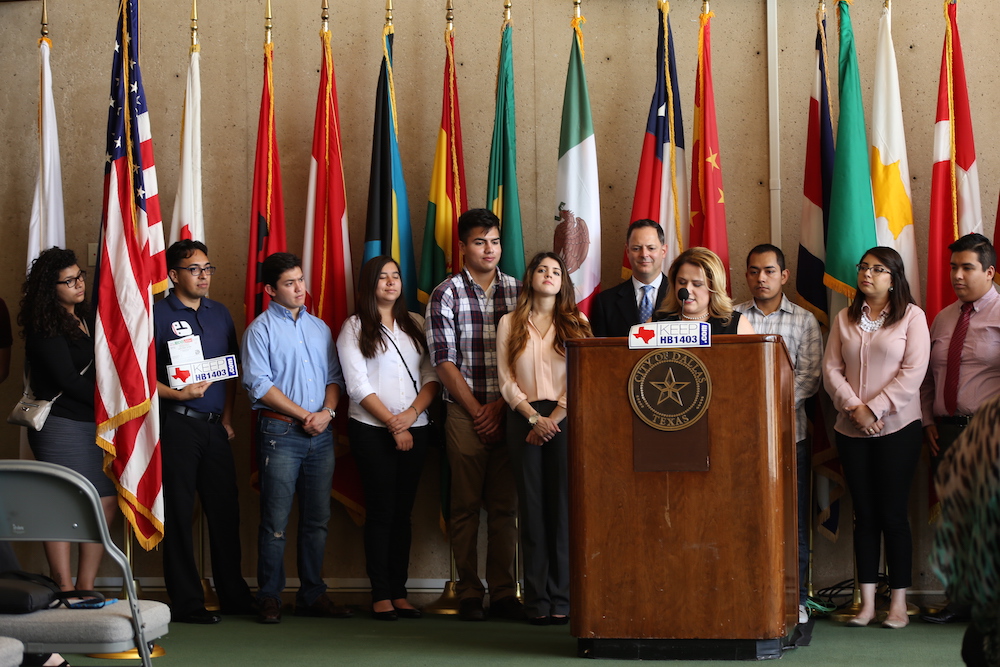 The end of the Texas legislative session was met by a sigh of relief from undocumented college and high school students around the state after the Republican-dominated state legislature failed to repeal HB1403, a 14-year-old law that allows some undocumented immigrants to pay in-state college tuition.

The Latino Center for Leadership Development, a Dallas-based community organization, was one of the groups leading the charge to stop the proposed repeal of HB1403.

At a celebratory press conference held at Dallas City Hall, Miguel Solis, the center’s director, said that HB1403 advocates made moral and economic arguments to lawmakers during the legislative session.

“The effort to maintain the law wasn’t easy. It was full of ups and downs, but ultimately, a set of level-headed legislators who were driven by the acknowledgment of the positive impact DREAMers are having on our state and our nation came together to keep HB1403, and the DREAMers were yet again victorious,” Solis said, as his comments were met by applause.

About 30 students representing various state universities attended the conference, several of whom spent the past three months between their schools and the Austin Capitol to lobby state legislators.

Jose Luis Zelaya, an urban education PhD student at Texas A&M, said he benefitted from being able to pay in-state tuition. He added that, as a future educator, the threat of removing HB1403 made him think twice about how he would approach his own undocumented students.

“Whenever I see my own state wants to backtrack or repeal that policy, it makes me question what I would tell my students,” Zelaya said. “Would I separate them? Would I segregate them because their immigration status would then limit them from going to college?”

Texas became the first state in the U.S. to offer in-state tuition to undocumented immigrants in 2001 after it cleared both houses with overwhelming bipartisan support and was signed into law by then-governor Rick Perry.

Ramiro Luna, director of community affairs for LCLD, said that the threat of in-state tuition repeal has become a tradition every time the Texas legislative session opens, but the Tea Party-dominant sweep in the November state elections presented a legitimate threat.

“We had lost a lot of seats that were allies to our cause, so we were afraid that with some of the Republicans and Tea Party representation that we were now more jeopardized,” Luna said. “We wanted to make sure that we had more diverse support, such as the [Texas Association of Business]. That was one of the key components in making sure we were able to extend our hands across the aisle.”

State representative Rafael Anchia said that since he began serving in the legislature in 2004, it has felt as though the Latino legislators have been on the defensive when it comes to proposed immigration-related policies.

This time around, Anchia said, they were fortunate to have allies like House Speaker Joe Straus and several committee heads who reaffirmed their support for HB1403, but it will not always be that way.

“The composition can change, and it can change for the worse. That's why we need to keep voting. We need to be voting at two or three times the level that we're voting now,” Anchia said. “If we can't support the people who are doing important work inside the bodies, both Democrats and Republicans, then they're going to lose and this legislation will come back like a freight train.”