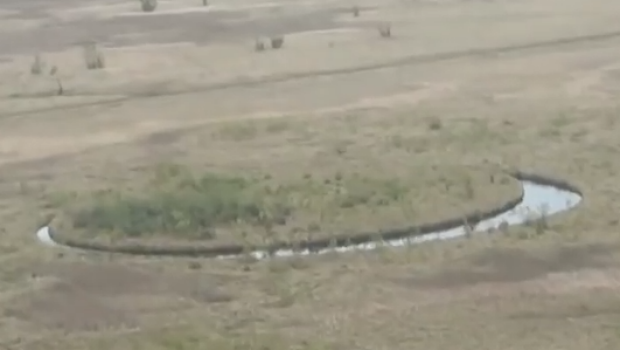 LatinaLista — When Argentinian business partners and friends Ricardo Petroni, Pablo Martinez and Sergio Neuspiller got together to form the production company Full Dimensional, they had high hopes of creating a horror blockbuster.

They were going to craft a story around the eerie and paranormal events that local people have routinely reported happening in the delta area of the Paraná River. However, while doing pre-production work, the film crew found something even stranger than fiction.

They found what they now call “The Eye.” (Editor’s Note: To see The Eye, you may need to download Google Earth.)

Surrounded by marshland, there is an island unlike anything ever documented. It is a circular piece of land surrounded by a thin channel of water. It appears the island is floating on something because — it actually moves. At times, it even changes shape.

Also, the water is cold and clear and the bottom of the water surrounding the island is solid. All attributes in direct contrast to the marshes surrounding it.

It wasn’t long before the production company forgot about their horror film and decided that a full-scale documentary exploring this strange island would make for a more interesting and rewarding film.

The plan is to assemble a multidisciplinary team of scientists and researchers, who have expertise in topics ranging from the environment to ufology, on an expedition to The Eye, though Petroni is a hydraulic engineer himself. Their hope is to gather the findings of their experts and present an explanation of this weird phenomena.

To help with the expedition and the film, El Ojo Project, the partners created a Kickstarter campaign and are striving to raise $50,000.

Like with any campaign, there are perks for various donations. If you really believe “something is out there,” and you have an extra $100, you’ll get to join the expedition virtually by watching a live stream as they journey onto and under The Eye.

Guest Voz: Marching towards Civil Rights has always been a 5-step process
Comment
Making climate change part of the school curriculum, an interview with Bill Bigelow of rethinking schools