Debunking the myth that Americans want the jobs of undocumented immigrants

LatinaLista — Alabama is still reeling from the aftershocks of passing the nation’s most punitive immigration bill on the books. Though the bill has wreaked havoc for public schools, it has done untold damage to the state’s economy. 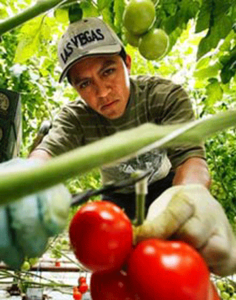 The state’s agriculture has suffered thousands of dollars in crop losses because immigrant workers were too afraid to show up to pick the crops. The crop loss means three things: 1. There will be a rise in food prices; 2. There will be a shortage among the foods lost; and 3. Latino immigrants are the backbone of the agricultural industry.

The importance of Latino labor in the agricultural industry is well understood and appreciated by Alabama farmers. As one said:

Jerry Spencer of Grow Alabama says Alabamians he’s attempted to hire lack the physical stamina and mental toughness for the jobs once performed by Hispanics.

In fact, it’s not only agriculture where Latino immigrants have made their presence irreplaceable.

The same can be said for other sectors of the economy: the hospitality industry; landscaping; food industry — from slaughterhouses to restaurant kitchens; construction; and it seems at the horse races.

An article in the New York Daily News outlines how the New York Thoroughbred Horsemen’s Association has asked a federal judge to grant temporary visas to let in nearly 100 grooms, hotwalkers and exercise — who are Latino immigrants.

Without the immigrant workers, the association is afraid the racing season will be a bust. So far, ads in local newspapers to recruit workers for the jobs have been as successful as Alabama farmers finding help.

“These are the behind-the-scenes workers that are the backbone of the racing industry, that bed down stalls, wash and care for the horses and put them through their exercise workouts on horseback on a daily basis,” said Jim Gallagher, executive director of the New York Thoroughbred Horsemen’s Association.

Some of the horse trainers who need the immigrant workers have said that unless they get the workers they need, they will have to lay off permanent workers.

An ironic situation since the heart of the argument for denying immigrants these jobs is to make them available to American workers — who evidently find shoveling manure beneath them though anti-immigrant politicians are getting these kinds of bills passed by shoveling tons of it.