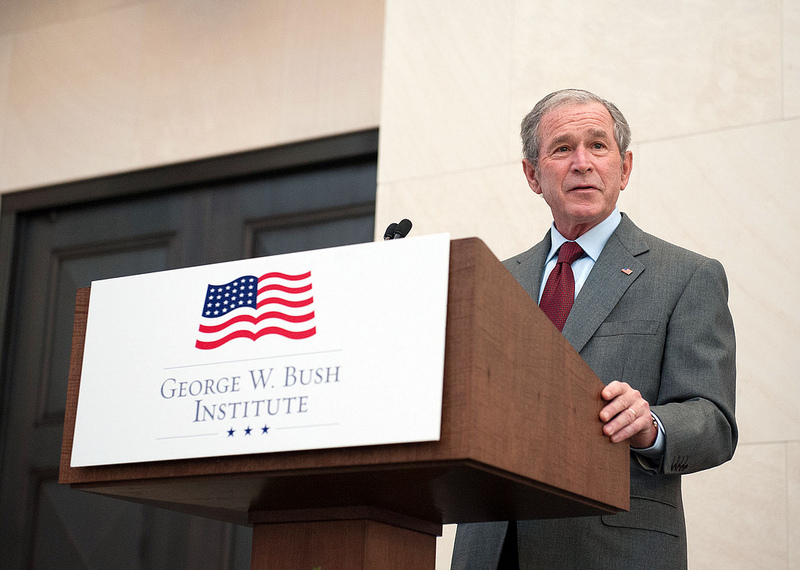 LatinaLista — This morning, former President George W. Bush presided over a naturalization ceremony held at the George W. Bush Presidential Center in Dallas, Texas on the campus of Southern Methodist University. It was expected that he would deliver remarks supporting immigration reform, especially since the House is supposed to be taking up the issue today.

And he did. While he makes clear that he didn’t want to get involved in the politics of the policy, he was equally clear in sending a message to his fellow party members about the importance of passing immigration reform and reminding them that they should not vilify the undocumented immigrants in their quest to reform current law.

Time will tell if anyone in the House of Representatives was listening to him.

Below is the full transcript of President Bush’s speech.

“Thank you very much, and welcome to Freedom Hall. I am incredibly grateful to be able to witness this joyous and uplifting ceremony. It will be inspiring to see people of different ages, and different countries, raise their right hands and take the oath to become citizens of the United States.

All who swear the oath of citizenship are doing more than completing a legal process. You are making a lifetime pledge to support the values and the laws of America. The pledge comes with great privileges. It also comes with great responsibilities.

For some of you, this day comes after a long and difficult journey. For all of you, this is a defining moment in your lives. America is your country now. It is more than your home. I welcome you to this free nation. I congratulate you and your families. And it is an honor to call you fellow Americans.

Our immigrant heritage has enriched America’s history. It continues to shape our society. Each generation of Americans — of immigrants — brings a renewal to our national character and adds vitality to our culture. Newcomers have a special way of appreciating the opportunities of America, and when they seize those opportunities, our whole nation benefits.

In the 1790s, an immigrant from Ireland designed the White House. I’m familiar with the place. He did a fine job. He also helped build the Capitol. In the 1990s, 200 years later, an immigrant from Russia helped create the Internet search engine Google. In between, new citizens have made contributions in virtually every professional field, and millions of newcomers have strengthened their communities through their hard work, through their love of family, and through their faith.

We’re a nation of immigrants, and we must uphold that tradition — which has strengthened our country in so many ways. We’re also a nation of laws, and we must enforce our laws. America can be a lawful society and a welcoming society at the same time.

We can uphold our traditions of assimilating immigrants and honoring our heritage as a nation built on the rule of law. But we have a problem. The laws governing the immigration system are broken. The system is broken.

We’re now in an important debate about reforming those laws, and that’s good. I don’t particularly want to be involved in the politics, or the specifics of policy. But I do hope there is a positive resolution to the debate. And I hope during the debate that we keep a benevolent spirit in mind, and we understand the contributions immigrants make to our country.

We must remember that the vast majority of immigrants are decent people who work hard, and support their families, and practice their faith, and lead responsible lives. Some willingly defend the flag, including two about to take the oath here today.

At its core, immigration is a sign of a confident and successful nation. It says something about our country that people all around the world are willing to leave their homes and leave their families and risk everything to come to our country. Their talent and hard work and love of freedom have helped us become the leader of the world.

Our generation must ensure that America remains a beacon of liberty and the most hopeful society the world has ever known. We must always be proud to welcome people as fellow Americans. Our new immigrants are just what they’ve always been — people willing to risk everything for the dream of freedom.

America remains what she has always been: a great hope on the horizon, a blessed and promised land. We honor the heritage of all who come here, no matter where they come from, because we trust in our country’s genius for making us all Americans — one nation under God.

It’s a joyful day for you all, and it’s one you’ll always remember. And so will I. (Laughter.) In a few moments, we will share the same title — a title that has meant more to me than any other, and I’ve had a lot — that would be Citizen of the United States. I congratulate you and ask God’s blessings upon you.”