Latina Lista: News from the Latinx perspective > Causes > Social Justice > A very important thing happened at the Oscars and hardly anyone is talking about it 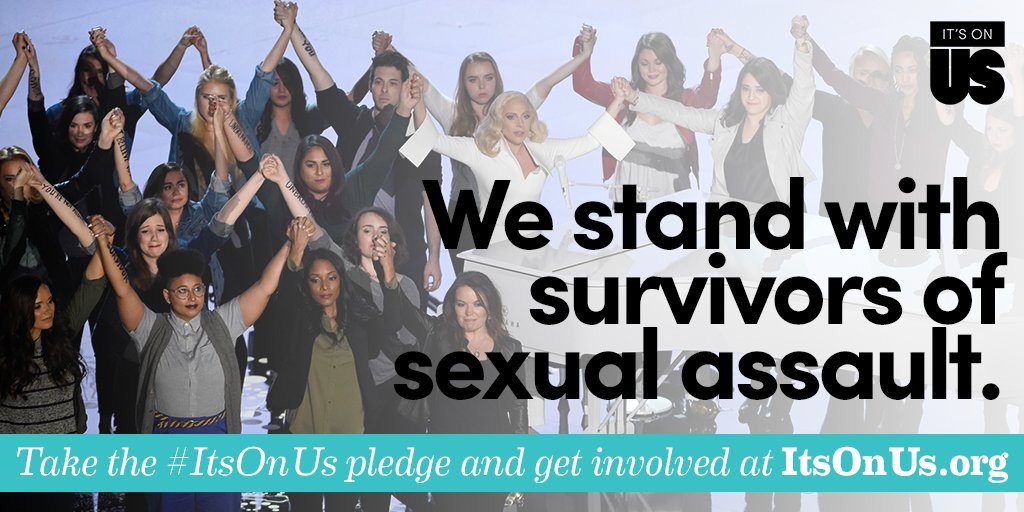 LatinaLista — From all the Monday morning-after Oscar critiques on the major networks, one would think there were only four things of noteworthy importance about the Oscars: Chris Rock’s monologue, Leo DiCaprio’s Best Actor win, Spotlight’s surprise Best Film crown and the show’s low ratings.

Hardly anyone mentioned Lady Gaga’s emotionally charged song about real-life sexual assault losing out to a James Bond theme song. Forget that 50 survivors of sexual assault stood hand-in-hand on the stage in front of millions of worldwide viewers, many of whom had not come out as survivors before last night.

Or that Vice President Biden had made a special appearance at the Oscars to specifically introduce the song, which was the theme song for the film The Hunting Ground and to announce a national campaign to change the culture around sexual assault called It’s On Us.

It’s On Us wants people to sign a pledge that when we see a situation where there is the possibility of a sexual assault occurring due to someone being drunk or abusive or both, we do something. At the least, we go for help.

The campaign is targeting college campuses where unconsensual sex, aka sexual assault, is a more common occurrence than in other environments, though it happens everywhere and can happen to anyone.

college campuses, featured, Lady Gaga, sexual assault, the Oscars
Previous Post Researchers create "BFF" campaign to save bananas from extinction, which may be closer than we realize
Next PostBilingual hotline helps Latino voters on Super Tuesday

Researchers create "BFF" campaign to save bananas from extinction, which may be closer than we realize
Comment
Bilingual hotline helps Latino voters on Super Tuesday