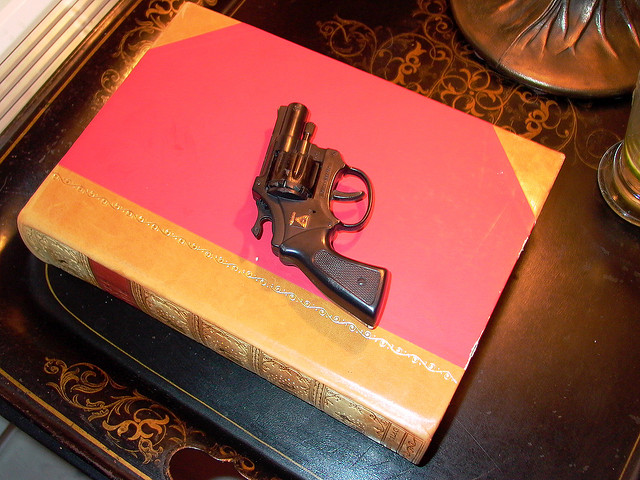 By Naomi Reed
The Conversation

Perusing a passage on the Civil War in a high school student’s history textbook in Texas might leave you wondering if black Americans were ever enslaved and if there really is any truth to anti-black racism at all.

A natural question is, are these textbooks having an impact in framing issues of race on the reader?

The fact is that Texas’ size and buying power influence how textbooks get written for children throughout the nation.

As an ethnographic researcher of race and education in Texas for the last 10 years, I have come to recognize that the US history textbook materials available to high school students can end up perpetuating damaging images of blackness.

Textbook language may not exactly pull the trigger of a police officer’s gun, but it could very well drive the thinking involved in the act of shooting an unarmed black male.

This becomes evident during depositions on police brutality by law enforcement officials. Many of these police officers describe their fear of the black male victims. They often said they anticipated violence and presented black aggression as their justification for firing. The expressed beliefs of these officers about black males sound very similar to the language authored by writers and publishers of many Texas textbooks.

Research has shown that fear and a lack of understanding of the context in which other people live (especially racial context) can have fatal outcomes.

Former Professor of Sociology Barry Glassner explains how such fears are perpetuated. Glassner shows how politicians and other opinion leaders emphasize the violence perpetuated by black males over the arguably greater amount of violence black males suffer themselves.

This ends up fostering a fear of black men in American minds and consequently in white police officers’ imaginations.

Further, Glassner notes, much of what is believed about black males comes from “omissions” made in the media and in news reports about black victims of crimes. Similar omissions occur in textbook passages as well and students are left thinking that during slavery white suffering outweighed black suffering.

This makes it difficult to connect a history of servitude and oppression to current day inequality.

Consider the language authored by writers and publishers of many Texas textbooks, specifically David Kennedy, the author of 15 editions of the nationally used advanced placement text, The American Pageant. The following passage highlights anti-white language and even blames black slaves for the perpetuation of these words. Notice that it omits common racial epithets for black slaves.

Many of the poorer whites were hardly better off economically than the slaves; some indeed, were not so well off…some of the least prosperous non-slaveholding whites were scorned even by slaves as “poor white trash.” Known also as “hillbillies,” “crackers,” or “clay eaters,” they were often described as listless, shiftless, and misshapen. Later investigations have revealed that many of them were not simply lazy but sick, suffering from malnutrition and parasites…”

Or, the following that suggests that white racial beliefs of black laziness are rooted in black people actually avoiding work, and not in racist notions of superiority:

Not surprisingly, victims of the “peculiar institution” devised countless ways to throw sand in the gears. When workers are not voluntarily hired and adequately compensated, they can hardly be expected to work with alacrity. Accordingly, slaves often slowed the pace of their labor to the barest minimum that would spare them the lash, thus fostering the myth of black “laziness” in the minds of whites.

Or, yet another quote, that suggests that black slaves were given more freedoms than we are typically aware of and that these freedoms were willingly granted by white slave owners:

Within this paternalistic system, black slaves were able to make reciprocal demands on their white owners and to protect a “cultural space” of their own in which family and religion particularly could flourish. The crowning paradox of the slaveholder paternalism was that in treating their property more humanely, slave-owners implicitly recognized the humanity of their slaves and thereby subverted the racist underpinnings upon which their slave society existed.

Now consider how law enforcers such as Darren Wilson, the infamous cop who shot and killed Michael Brown in Ferguson, Missouri, in 2014 described his altercation with Brown. He said it made him “fearful” – like “a five-year-old child fighting The Hulk.” He insisted that he had never seen such “evil.” He said Brown behaved in a “monstrous” fashion that made him fear for his life.

Wilson’s language demonstrates the commonalities among racial profiling of black youth by police officers and the revisionist historical narrative of blackness in the United States that is available in the textbooks.

What Wilson did not mention was that he cursed at Brown and harassed him prior to the altercation that resulted in the teen running from a hail of bullets, as reported by Brown’s friend, eyewitness Dorian Johnson.

How violence of black lives is omitted

This is not all. Texas history textbooks are replete with such revisionist history.

Consider the following interpretation of Nat Turner’s rebellion from The American Pageant:

The state’s response to abolition was to strengthen the slave codes and moments like “Nat Turner’s rebellion in 1831 sent a wave of hysteria sweeping over the snowy cotton fields and planters in growing numbers slept with pistols by their pillows.”

The violence and fatal anti-black oppression that historians argue had fueled the uprising were left out. Instead, the “fear” and “anxiety” Turner purportedly put in the “hearts of white Americans” “causing them to sleep with their guns under their pillows” is the only description available. This potentially translates into narratives that are absorbed and expressed by law enforcers such as Wilson. Whether or not Darren Wilson was actually scared is not the point. The more telling detail is that he comes up with a narrative of his own victimization that sounds all too familiar.

Darren Wilson and the white Americans who slept with their guns under their pillows during slavery become the focus. The lived reality of pain and violence of black victims is omitted.

Representations of race in American history textbooks have become more exclusionary as they show even less regard for an accurate historical portrayal of black oppression.

The Texas State School Board (SBOE) has been debating whether or not to even include the word “slave” in the textbook since 2010. Just recently Texas education officials suggested that slavery should be considered only as a side issue when teaching the Civil War.

Another recent example comes from a Houston-area mom, who conducted a cogent analysis of her ninth-grade son’s geography book. She demonstrated why her son was so upset through tweets of video and photographs of the textbook’s whitewashing language. She shows that the geography text refers to black slaves as “workers.”

Once her pictures went viral on social media outlets, David Levin, the CEO of McGraw-Hill, the major textbook publisher responsible for the geography textbook, expressed promises of a better review process in the future. He called the word choice of workers a mistake and issued an apology.

However, the contention around Texas textbooks and race continues.

How can we stop the next Mike Brown?

If we are to truly move toward making black lives matter, we must start with how we talk about black people in history. And more importantly, who we allow to shape the conversation on that history.

Often we do not focus on the important role of civil servants on textbook adoption committees, but their choices could well perpetuate racist beliefs and also lead to potentially fatal consequences.

As mentioned earlier, the decisions Texas makes matters beyond state boundaries. So, I suggest we start with a Texas State Board of Education that represents diverse racial perspectives. As these officials are elected, concerned citizens must support candidates that will bring a more critical eye to which materials are to be adopted into the schools.

I also suggest that we draft stronger policy restrictions on the materials that come out of major Texas publishing houses.

If public schools continue to teach police officers and members of society in general that black slaves and poor whites suffered the same conditions or that black resistance to unpaid labor and death was unnecessary and overly violent, how will we be able to stop the death of the next Mike Brown?

Naomi Reed is a Post Doctoral Fellow at the University of Texas at Austin.