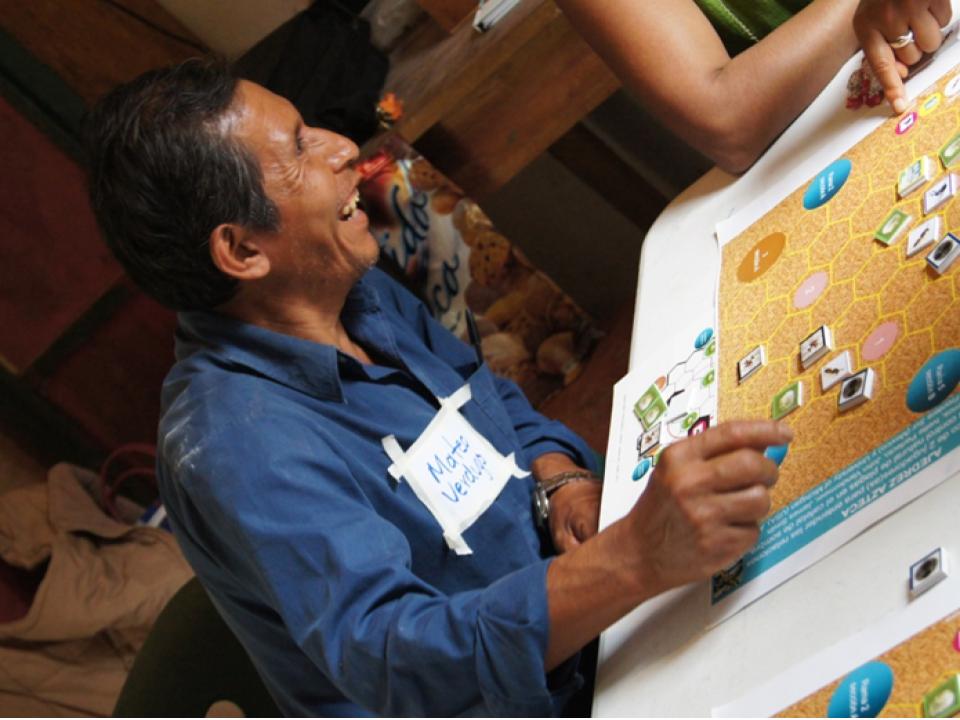 A new board game helps teach small-scale Mexican coffee farmers about the complex interactions between the insects and fungi that live on their plants. The game also teaches farmers about how some insects help to control other pests.

Instead of queens, knights, bishops, and pawns, the Azteca Chess board game uses tokens representing ants, ladybugs, wasps, and flies living on a shade-coffee bush. The goal of the two-player game is for each player to capture the opponent’s insect tokens.

The network of insects and fungi that lives on these plants has the potential to aid in the control of the coffee-rust fungus, which has ravaged Latin American plantations for several years, according to ecologists Ivette Perfecto and John Vandermeer, who helped develop the board game. The game helps to drive home that point.

“Most of these farmers pay little attention to, or have little knowledge of, the behavior of the many small, inconspicuous organisms that may be key to the operation of autonomous pest control,” says Perfecto, a professor at the University of Michigan School of Natural Resources and Environment.

“Our goal is to help farmers to continuously update their management strategies based on a better understanding of the ecology of their farms, and we believe this board game helps us to facilitate that kind of learning.”

Perfecto and Vandermeer, a professor in the ecology and evolutionary biology department, have operated research plots at an organic coffee farm in southern Chiapas, Mexico, for more than 20 years.

“I had no idea there was a chain and each animal has a function and they compete.”

In 2015, the researchers held 14 workshops in Chiapas for more than 100 small-scale coffee farmers. The workshops included natural history lectures and Azteca Chess competitions, as well as quizzes to assess the value of the board game named for the tree-dwelling ants.

The quizzes revealed a statistically significant “gaming effect,” showing that farmers who played the game were better able to recall the species interactions than farmers who attended lectures but did not play the game.

The Azteca Chess board displays 39 hexagonal cells that represent—in a highly stylized form—a cross-section of a coffee bush. Various insects are represented by tokens that players move from cell to cell.

Participants in the 2015 Chiapas workshops said they were amazed and amused when they learned of the insects’ elaborate behaviors.

“There are so many little animals in our coffee farms that we prefer to ignore them,” one farmer told the researchers. “I had no idea there was a chain and each animal has a function and they compete.”

In addition, workshop participants said they were intrigued to learn that some of the tiny creatures can help them fight coffee rust. Farmers said they learned there are feasible actions they can take to promote this type of natural pest control, including tolerating Azteca ants and retaining the trees they use for nesting, tolerating scale insects, reducing the use of pesticides that kill beneficial organisms, and paying more attention to small creatures and their behaviors.

“You came today to awaken our belief that our coffee farms are not 100 percent lost” to the coffee rust fungus, one farmer said. “We have defenders, ants that are struggling for us. We are very rude with them, but starting today we are going to give ants a little bit of freedom. We won’t mess with them, just let them be there.”

The researchers report their findings in Ecology and Society. Additional authors of the study are from El Colegio de la Frontera Sur in Chiapas and Universidad Autónoma de Chapingo, Campus Chiapas, Mexico. A National Science Foundation/OPUS grant and an ECOSUR special grant supported the workshops.

Featured Photo: Mateo Verdugo—who lives in the small hamlet of Azteca on the slopes of the Tacaná Volcano—enjoys playing Azteca Chess. (Credit: U. Michigan)