The DREAM Movement’s New Agenda: Five Young Immigrants Tell Us Why They’ve Moved Beyond Seeking a Pathway to Citizenship 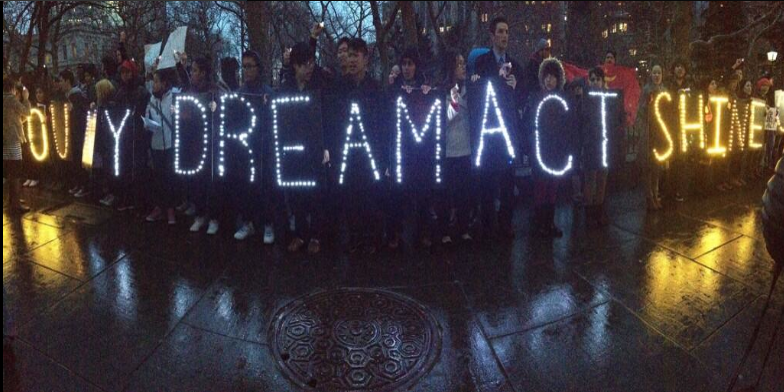 By Von Diaz
Feet in 2 Worlds

No group has been more visible in the struggle for immigrant rights than undocumented youth. Taking the name DREAMers, evoking both the proposed federal DREAM Act as well as a sense of hope about achieving the “American Dream,” these young people have been on the front lines of one today’s most prominent civil rights struggles.

In New York, an estimated 90,000 young immigrants are eligible for the DREAM Act. But the recent failure of the New York DREAM Act squashed their dreams of financial aid for college. More than a decade after it was first introduced, the federal DREAM Act has yet to be enacted. And so for this influential group of young activists the level of frustration has reached a new high.

As a result, growing numbers of young immigrant activists have turned away from the core goal of the DREAMer movement. They have repudiated a proposed law that they once fought for, which would provide them a pathway to U.S. citizenship. Now, they argue the proposal is unfair because it would leave behind their undocumented parents and grandparents.

Thousands still continue to fight for comprehensive immigration reform. But the struggle for immigrant rights is changing once again.

Feet in 2 Worlds spoke to activists at the forefront of this transformation. Listening to their voices can make it easier for the rest of us to understand what’s at stake, and how the political system has failed to provide what matters to them most—a chance for a happy life with their families without fear of deportation.

Four years ago, Sonia Guiñansaca was your typical immigration activist. She identified as a DREAMer, and was arrested during a civil disobedience demonstration in Washington D.C., dressed in a white cap and gown. Now, the 24 year old Guiñansaca no longer refers to herself as a DREAMer, but rather as a poet and cultural activist.

She says after years of being a leader in the immigrant rights movement, public policy debates began to feel robotic, and often stripped her of her identity.

“The DREAMer narrative disciplines and censors a lot of undocumented people. It brings notions of who’s a good immigrant, and who needs to prosper in the U.S.,” she says.

She is critical of the movement that has elevated young, undocumented immigrants like her to a higher status than other unauthorized immigrants.

“I think we talk about the border, but we ourselves within the immigrant rights movement, we’ve been building walls, about who we are and as human beings and people and our experiences. And now artists are debunking all of that stuff and saying no. We’re beyond that, we’re more than that,” she says.

Guiñansaca is currently completing a degree in Africana, Puerto Rican, Latino and women and gender studies at Hunter College. She moved to New York City from Ecuador in 1995. In addition to her poetry and academic pursuits, she works on the Undocuwriting project at CultureStrike.


Razeen Zaman is 24-years old, and has lived in the U.S. nearly all her life. Her family immigrated from Bangladesh 22-years ago after her father got involved in politics, and was violently targeted by an opposing political party. They attempted to come through official immigration channels, but she says they were scammed by an immigration attorney and subsequently fell out of legal status.

“I think there is a lack of understanding of how easy it is to become undocumented,” Zaman says. “There’s a lot of talk of people standing in line (to become citizens) and doing things the right way, and there are so many people who have tried to apply for ways to legalize their status. But unfortunately some of those paths are just not there right now.”

Zaman studied post-colonial studies at Sarah Lawrence as an undergrad, and revealed she was undocumented in 2010—the same year the federal DREAM Act failed in Congress. That year, she joined the New York State Youth Leadership Council, or YLC as it’s widely known, and began working on writing and introducing the New York DREAM Act.

Today she’s a law student at Fordham University, and the campaign organizer for the YLC. When the NY Dream Act failed on March 17, she was frustrated and dismayed, but adamant that they’ll get it reintroduced.

While committed to continuing the push for legislative reform, Zaman and the rest of the YLC have shed the signature “DREAMer” label. She says many reject the “special category” created for young undocumented immigrants created by President Obama’s Deferred Action program, or DACA. She’s become equally invested in pushing for an executive order to halt deportations, and is pushing for work permits and drivers licenses for all immigrants.

Last year, after seeing the hardships caused by deportations in her community, Claudia Muñoz turned herself into the Calhoun County Correctional Facility near Detroit, Michigan. Her goal was to organize detainees from within, advocate for their release, document the conditions they were living in, and test government claims that those being held had committed crimes.

“I was actually detained in a county jail, which is not just with immigrant women, but also American women who had been put through this cycle of poverty and violence. I went in thinking, ‘none of these immigrant women should be in here,’ and left thinking, ‘none of these women should be in here at all.’ It really impacted the way I see mass incarceration as a whole, but also how we fail women in this society,” she says.

Muñoz didn’t come to the U.S. as a baby, and she didn’t come with her entire family. When she was 16 years old she moved to Houston, TX, where she came to live with siblings who had already immigrated. She went to an historically black high school, and there became conscious of racial inequality in the U.S.—something she continues to connect to immigration reform issues. She once traveled between Houston and Monterrey, Mexico often on a tourist visa to visit her parents and other family members, but hasn’t been able to return to Mexico since 2001 because of her legal status.

In college she became more involved in immigration reform activism, and like many young people traveled to Washington D.C. to demonstrate and lobby Congress for reform legislation. When her nephew was caught with a small amount marijuana and put into deportation proceedings, she began questioning the criminal justice system and the politics behind the record number of deportations, expected to hit two million during the Obama administration.

“The legislative part is one small part of it. And even for those with papers, those who have a Green Card, if they commit a crime it can be revoked. Dignity isn’t going to be restored to the immigrant community by giving them a Green Card,” she says.

The first time Marco Saavedra, 24, infiltrated an immigrant detention center was 2012, a story which was later captured by This American Life.

He was also among the first wave of the #BringThemHome campaign, known as the DREAM 9, undocumented young people who traveled to Mexico and crossed back into the U.S., calling attention to immigration policy, border politics, and young people deported before Deferred Action was implemented by President Obama’s 2012 executive order.

“There has to be some responsibility in the community for those who do have access to this knowledge, to educate more and more people,” Saavedra says“I think everyone that has the consciousness and the time to be in the movement, and has the time needs to help people understand how we divide immigrants between deserving and not.”

Saavedra moved to Manhattan’s Washington Heights neighborhood with his family from Oaxaca, Mexico 20 years. He became interested in immigration reform activism as an undergraduate student at Kenyon College, where he became aware of the intersection between racial equity, human rights, immigration, and the criminal justice system; and turned his attention to deportations and immigrant detention centers.

Dominique Hernandez describes the climate among undocumented youth as one of anxiety, fear, and hope. She says frustrations are particularly high among immigrants who were young when they became activists, but now are in their mid-20s or older and no longer identify as youth. She says they feel left behind by the DREAM Act and the conversations surrounding the special privileges awarded to young people.

Hernandez has been in the U.S. for 10 years, moving from Ecuador when she was 14 years old, and has lived in Queens, NY ever since. She came with her mother and two sisters, following her father who came to the U.S. in 2002 seeking relief from economic hardship.

She’s in her final semester at Hunter College, completing a bachelor’s degree in psychology and art studio, where she’s focused on drawing, photography, and social practice art.

“I still don’t label myself as an activist. Art was a way for me to communicate things in different ways. It was more flexible for me to share things in art-making, than just using language. Especially when English is not your [first] language,” she says.

As the field organizer for the YLC, she’s worked closely with Razeen Zaman on the NY DREAM Act. Recently, Hernandez has been putting energy into artistic initiatives at the YLC. The YLC began as a support group, and focuses on “creating safe spaces” for undocumented youth to share their experiences. A few examples are the Arts and Expression program, which focuses on using art as activism, and plans an annual “coming out of the shadows” event where undocumented youth can share their stories.

“Art-making can shape the way people think about particular issues. When you use art as a tool to shift the conversation, from how the anti’s have already shaped this conversation, it’s a particularly powerful tool. We can talk about things that we want to talk about. Instead of talking about taxes we can talk about separation of families,” she says.

Fi2W is supported by the David and Katherine Moore Family Foundation and the Ralph E. Odgen Foundation. The Fi2W Magazine was made possible in part by The Media Consortium and the Voqal Fund.