Latina Lista: News from the Latinx perspective > Columns & Features > BlogBeat > Dual-Language Programs on the Rise Across the U.S.

Dual-Language Programs on the Rise Across the U.S. 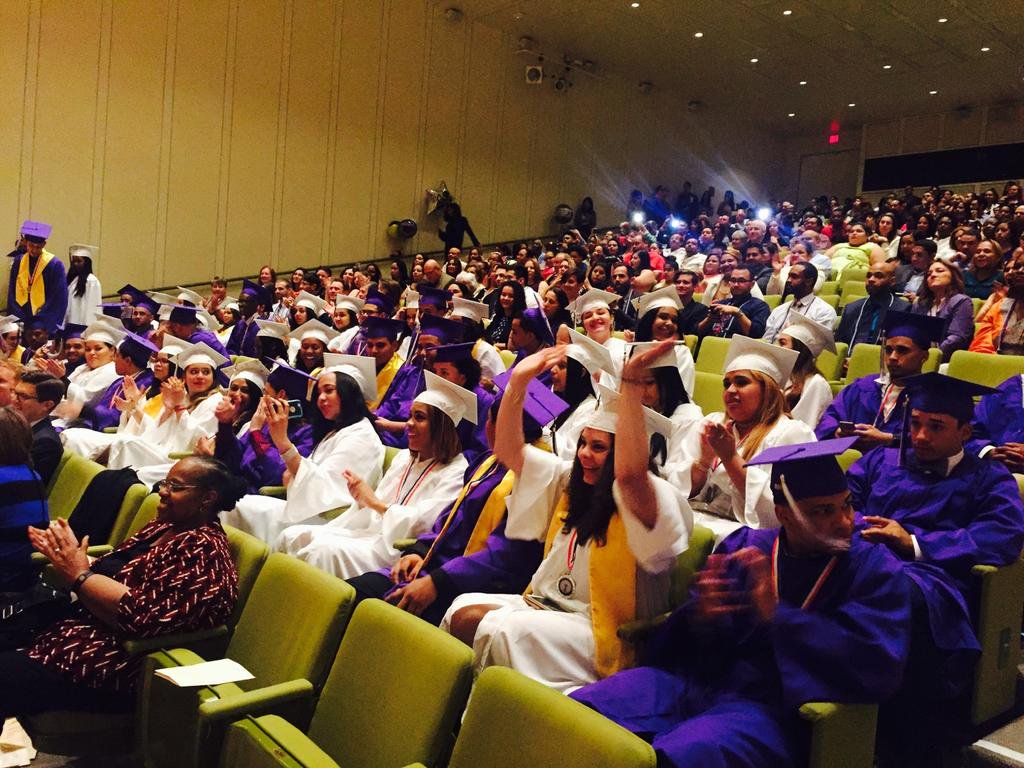 Graduates in white and purple robes exited the auditorium, their newly turned tassels bouncing as they sang and danced to a recording of the popular Latin salsa tune, “Vivir Mi Vida.”

They had just graduated from the Margarita Muñiz Academy in Boston — many with more than a high school diploma. Forty-six of the 51 new alumni of the dual-language school had also earned a Seal of Biliteracy, an official recognition of their academic proficiency in both English and Spanish.

“The majority of these students speak to their families in Spanish,” said Frances Esparza, assistant superintendent of the Office of English Language Learners for Boston Public Schools. “They love that they have that connection and that they kept their language.”

And though that’s one perk of learning Spanish and English side-by-side for these students, the Seal of Biliteracy also looks good on a resumé — for college and beyond.

“What it does is it kind of flags universities to see that this student has put that extra effort into their studies,” Esparza said of the June graduates. Studies have shown that they “are more prone to go to four-year universities and continue in their program and finish their program.”

The Boston school district currently has five dual-language programs — in which students learn core subject matter in two languages — and is developing plans to add three more in time for the 2017-18 school year to teach students French and Haitian Creole, Portuguese and Cape Verdean, and Mandarin and Cantonese in addition to English.

Such programs are growing in popularity all across the country. In 2000, there were an estimated 260 dual-language programs in the U.S. when then-Secretary of Education Richard Riley called for an increase to 1,000 by 2005. The federal education department was unable to provide an exact number of such programs operating in schools today, but according to an article out of the Harvard Graduate School of Education in 2011, it’s estimated that the number has reached 2,000.

A joint U.S. Department of Education-American Institutes for Research report shows 39 states and Washington, D.C. were offering dual-language education during the 2012-13 school year, with Spanish and Chinese programs cited as the most commonly used languages.

Last school year, the New York City Department of Education added 40 new dual-language programs in schools across the city. The District of Columbia Public Schools is poised to open three more dual-language programs this fall at the elementary, middle and high school levels, for the first time guaranteeing that students who wish to complete all of their pre-K-12 instruction in both Spanish and English can do so in the school district.

Widely cited research by George Mason University Professors Emeriti Virginia Collier and Wayne Thomas has shown that children who are bilingual perform better academically than their peers who speak only one language. A study of 85,662 students in North Carolina Public Schools during the 2009-10 school year found that overall, English-language learners in two-way dual-language programs had higher reading and math scores. At the middle school level, most students in these programs were scoring higher than monolingual students in the grade above them, and in some cases two grade levels higher than their current academic year.

Despite these findings, bilingual education has met with its share of opposition. While German was frequently taught alongside English in American schools, even long before the U.S. became a country, the “Americanization Movement” in the early 1900s and World War I sparked widespread opinion that foreign language instruction was a “threat to the integrity and the unity of U.S. society,” said Nelson Flores, an assistant professor in the University of Pennsylvania Graduate School of Education.

In the late 1990s and early 2000s, California, Arizona and Massachusetts banned bilingual education in schools and mandated that students who were English-language learners be placed in English-only immersion programs. Still, schools found loopholes and began to adopt dual-language models, which take on various forms, said Flores, who works with dual-language programs in Philadelphia.

At Camino Nuevo Charter Academy schools that serve a high percentage of Hispanic English-language learners in Los Angeles, for example, kindergartners spend 80 percent of the school day learning in Spanish and 10 percent in English. Camino Nuevo Literacy and Language Specialist Rachel Hazlehurst said each subsequent year, there is a 10 percent decrease in Spanish-language instruction and a 10 percent increase in English-language instruction. By fifth grade, the breakdown is 70 percent English and 30 percent Spanish. Other popular models evenly split instruction in English and a second language, or adopt a 60-40 format.

Bilingual education is up for debate again in California and Massachusetts, where legislators have proposed overturning their respective bans. Hazlehurst said the fact that this is once again becoming a political issue, at least in California, indicates that these programs have been successful.

“Thankfully, public policy leaders are returning to the research about what works for ELLs and therefore bilingual programs are back in favor – because the research shows they work,” she said in an email.

But it’s not just legislators who need convincing. Hazlehurst said at times the biggest resistance to bilingual education, in her experience, has come from Spanish-speaking Latino families who prefer that their children focus only on English in school because they will learn to speak Spanish at home.

“I think this is more related to the population we serve than a comment about Latinos in general,” she said, adding that the large majority of Camino Nuevo students come from families that are “largely low-income and less educated,” and their reactions seems natural.

“In order to help families understand the benefits of bilingual education, we invest heavily in partnering with families to teach them and increase their comfort levels with the idea,” Hazlehurst said. “We are very aware that we are asking them to make an alternative choice by choosing our program. It is not the choice that many of their neighbors and family members have made, and so we have to partner with families to support them as they increase their knowledge about the benefits of bilingual education and learn how to support their children once they are enrolled.”

In Boston and Philadelphia, Esparza and Flores — who both grew up speaking Spanish in their homes — have observed similar levels of buy-in to dual-language programs from immigrant communities and more affluent, white families alike.

Esparza has noticed a growing interest in these programs from families associated with universities in Boston, who want their children to learn languages commonly used in business negotiations. In parts of Philadelphia, Flores said, prominent Latino community organizations have been advocating for these programs and mobilizing parents to enroll their children.

“It’s a diverse coalition of people who are supporting it — not necessarily for the same reasons,” he said, “but I think compatible reasons.”

Overall, the issue is “less overtly political” now, said Flores. Whereas in the civil rights era, bilingual education was often framed as a political struggle for the Latino community, “now it’s oftentimes most often framed as something that’s good for all children — something that can help people get jobs as part of the global economy.”

It’s harder for people to argue with that, he added.

Meet the new market disruptors
Comment
A Latina Secretary-General of the United Nations?