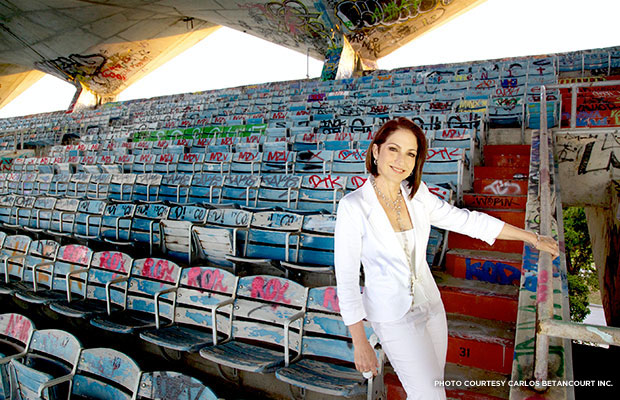 We’re big fans of Gloria Estefan, the international superstar and trustee of the National Trust. In June 2013, we profiled her in the Spring issue of Preservation magazine, and she agreed to be the official “Voice of Miami Marine Stadium.” Then, in January 2014, she and Jimmy Buffet were part of a one-of-a-kind celebration at the Coral Gables Museum.

This past Saturday, we found yet another reason to admire her: She announced a $500,000 gift through her foundation to our local partner, Friends of Miami Marine Stadium (FMMS).

Gloria’s announcement was part of the National Trust’s “Day of Art and Action” at Miami Marine Stadium. In addition to announcing Gloria’s gift, the ART History Mural Project brought nine internationally recognized artists to the stadium to create large-scale murals. Curated by artist Logan Hicks, the murals will be photographed and sold as prints to benefit FMMS.

In addition, we held an Instagram contest where winners attended the day’s festivities, met Gloria and Hilario Candela (the stadium’s architect), and watched the street artists create their pieces. To help you get a feel for the day-long event and learn more about the artists, we pulled some photos from Instagram — you can see more by searching the hashtag #marinestadium or checking out the @SavingPlaces account. Enjoy!

Saturday’s event also debuted a Public Service Announcement narrated by Gloria. It’s a tie for our favorite part: the vintage photo of her on the Stadium’s legendary floating stage versus her voice when she says “Miami Marine Stadium needs you.”

Gloria stayed at the Stadium for hours after her announcement, doing interviews with media (The Miami Herald, Miami New Times, NBC6, Univision, etc.), and posing for photos with Instagram contest winners and artists.

Luis Berros is a lifelong “semi-native” of South Florida, moving with his family to Miami as a child. Finding an outlet for his creativity and a welcoming community in the street art clubs of South Florida in the early 1980s, Luis knows firsthand the power of art without limits. Today, he is engrossed in the underlying narrative of his work, which is to accelerate fine art and street art along the same plane and to document the collision.

Born in the Dominican Republic in 1984, Evoca1 spent most of his childhood drawing on walls and playing baseball until eventually moving to Florida when he was 11 years old. He has been making art his whole life without any formal training, teaching himself how to paint with oil, acrylic, latex, and spray paint. He currently lives and works in Miami.

Under the name Elbow Toe, Brooklyn-based artist Brian Adam Douglas has been pasting his distinctive woodcuts, stencil work, large-scale charcoal drawings, and collages onto the walls of cities around the world for the past decade. His diverse practice is anchored by an interest in the human gesture as a powerful form of communication that is often charged with unspoken narratives.

Born in Fullerton, Calif., Ian Kuali’i lives and works in New York City. He describes his creative process as “the meditative process of destroying to create.” His art is influenced by his ancestral ties to the Southwest United States and to Hawaii, as well as esoteric symbolism, mysticism, global politics, and the theme of urban decay.

In the 1970s, Doze Green was a hip-hop pioneer and a subway-tagging graffiti artist who often participated in break dance performances in SoHo and Lower East Side art galleries. Moving from walls to canvases, Green’s paintings incorporate his signature style of figurative abstraction and the use of letterforms.

Inspired by various stages of his life, from skateboarding to break dancing and rock climbing to the experiences of fatherhood, New Jersey-based artist Joe Iurato creates tiny wooden figures and sets them loose in public places. The daring little people dangle from bridges, swing from street signs, and often create their own “art” in the form of painted slogans left of sidewalks and curbs.

In a career spanning 30 years, RISK has impacted the evolution of graffiti as an art form in Los Angeles and across the world. RISK gained notoriety for his unique style and pushed the limits of graffiti further than any writer in L.A. had before. He was one of the first writers in Southern California to paint freight trains, and he pioneered writing on “heavens,” or freeway overpasses.

Rone’s work attempts to locate the friction point between beauty and decay, the lavish and despoiled, creating an iconic form of urban art with a strong emotional bend. A key individual in the Melbourne, Australia street art scene, Rone’s images use “calming beauty” and innate contrast to the walls that they grace to fuse dirt with decorativeness.

(Featured Photo: Gloria Estefan presented a gift of $500,000 to the Friends of Miami Marine Stadium through her foundation on Saturday, June 28. Photo Credit: Carlos Betancourt Inc.)

Grant Stevens is the Manager of Community Outreach at the National Trust. He’s proud to be from a Main Street Community and the Black Dirt Capitol of the World – Conrad, Iowa! Growing up on a farm, he always loved going to town and looking at the historic buildings. Now a resident of DC, Grant enjoys reading, running, and anything rural.