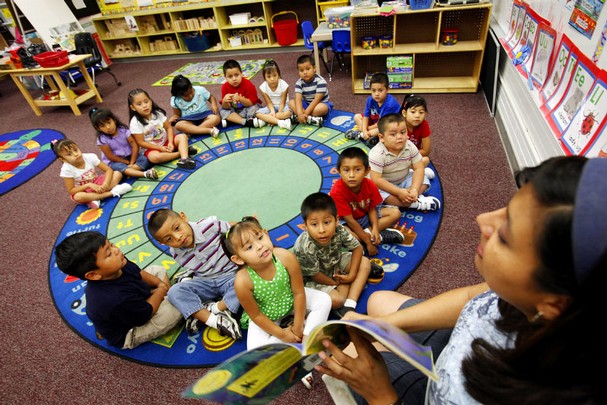 New U.S. Census data show a dramatic increase in the number of Hispanics attending school, reaching nearly 18 million in 2016. The figure — which covers education at all levels — is double the total 20 years earlier.

“Hispanic students now make up 22.7 percent of all people enrolled in school,” said Kurt Bauman, the chief of Census Bureau’s Education and Social Stratification Branch, in a statement.

The new report includes data for public and private schools at the K-12 level, colleges and universities, as well as “nursery schools,” which the Census defines as education for 3- and 4-year-olds. (The percentage of low-income Hispanic families enrolling their children in preschool programs has been growing, according to a report last year.)

The growth of school enrollment among Hispanics has been accompanied by a decline in high school dropout rates, the Census Bureau announcement notes. In 1996, 35 percent of Hispanics ages 18 to 24 had not completed and were not enrolled in high school. By 2016, the figure had plummeted to 9.9 percent, 4 points higher than the national average of 6.4 percent, according to the Census bureau.

Overall school enrollment in the prekindergarten through postsecondary was 77.2 million, according to the Census Bureau. School enrollment of Hispanic students at all levels grew 36.3 percent – or 4.8 million – from 2006 to 2016 and 9 million since 1996. For more on this and related issues, take a look at EWA’s Topics Page, Demographics and Diversity.