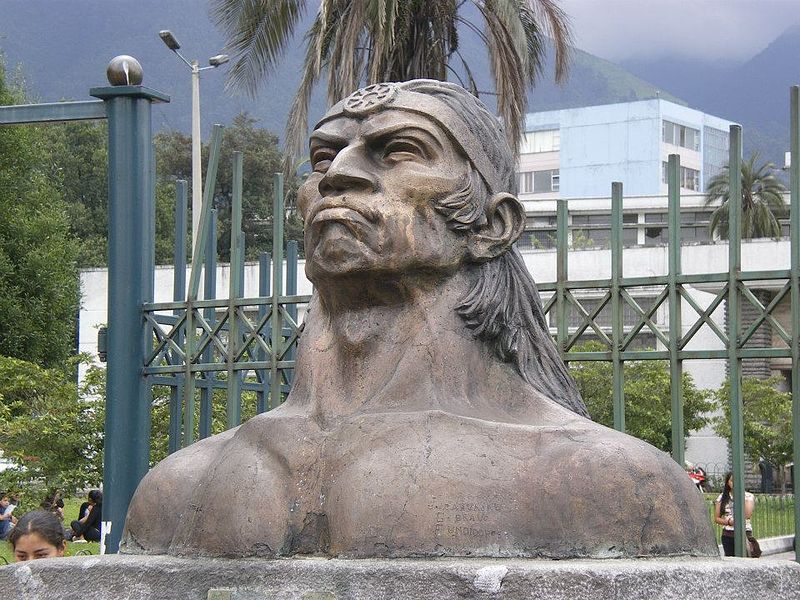 The warfare of the Inca civilization was characterised by a high degree of mobility, large-scale engagements of hand-to-hand combat, and the establishment of a network of fortresses to protect an empire of over 10 million subjects. Conquestgave the Incas access to vast new resources and gained prestige for both rulers and those warriors who displayed courage on the battlefield. Diplomacy was an important tool and used time and again by the Incas to acquire new territory with the minimum of bloodshed but sometimes they were obliged to engage in battleand several regions of the empire persistently resisted Inca rule. Ultimately, though, only the arrival of the Europeans with their superior technology would stop the Inca rulers relentlessly expanding their empire.

The Incas were great diplomats, and they were able to extend their influence throughout the Andes region by negotiating trade and tribute agreements, offering impressive gift exchanges, organising inter-marriages, and relocating sympathetic populations to newly acquired or troublesome areas. Only when these strategies failed did warfare become necessary. Early Inca warfare was concerned merely with acquiring the wealth of the enemy but gradually, as they became more ambitious, they sought to permanently control the territory of their neighbours and so spread their influence across South America.

Conquest was important for a ruler’s prestige, not only during his reign but also after his death when his deeds would be recounted and pilgrimages made to the sites of his great victories. Rulers naturally wanted to outdo their predecessors and so the empire expanded ever outwards into new territories throughout the history of the Incas.

CONQUEST WAS IMPORTANT FOR A RULER’S PRESTIGE, NOT ONLY DURING HIS REIGN BUT ALSO AFTER HIS DEATH WHEN HIS DEEDS WOULD BE RECOUNTED.

There was also a religious element to warfare as the Incas saw their conquests as furthering the worship of the sun god Inti. For this reason, campaigns were preceded by fasting for two days and then ceremonies of sacrifices (usually black llamas and sometimes children too) and feasting. Priests and religious idols accompanied the army on campaign, and certain religious events were respected even during battle. For example, on the new moon no fighting was permitted, a fact the Spanish took advantage of when they attacked Cuzco in the first half of the 16th century CE.

The Inca army was largely composed of non-Incas, those conquered peoples who were obliged as a form of tribute to give their persons for use by their overlords. For this reason, the Inca army was a conglomerate of individual ethnic units, each led by their own local commander and fighting with their own preferred weapons. Speaking different languages, these units must have been difficult to coordinate in the heat of battle. In addition, these soldiers were in fact farmers and their effectiveness, or lack thereof, probably explains why the Incas eventually began to form a professional army. Units were divided into decimals, the smallest group being 10 men commanded by a chunka kamayuq, then 100 led by a pachaka kuraka, then 1,000 men under a waranqa kuraka, and finally 10,000 led by a hunu kuraka. Officers often commanded in pairs, although it is unclear how duties were divided between them.

Inca armies, then, consisted of tens of thousands of troops, perhaps even over 100,000 in some battles. Soldiers were called up from the general populace on a rotation basis with any male aged from their mid-twenties to their fifties eligible for active service. Soldiers could take their wives with them on campaign. Men under the age of 25 were expected to act as baggage carriers and joined an impressive entourage of non-combatants which included cooks and potters. Although the troops were farmers when not needed by the state all Inca males were given weapons training in their youth and performed in ritual battles. The pure-blood Incas formed an elite army of a few thousand; sometimes they were supplemented by choice picks from other units too. They acted as the personal bodyguard of the Inca king and wore distinctive tunics of black and white checks with a bright red triangle at the neck. The senior army commanders were usually of royal blood. The Inca king was the commander-in-chief, and to avoid subsidiary commanders gaining too much prestige and making themselves a threat to his reign, he often commanded the army in the field personally. However, as the empire expanded, this became too impractical for the king to be so long-absent from the capital Cuzco, and the burden of command in the field often rested on the shoulders of his brother or son. Either way, field commanders rarely involved themselves in the front line, and it was more usual for them to issue general orders from the safe distance of a command post.

Battles were bloody and confused episodes of hand-to-hand combat. Weapons differed depending on the ethnic origin of particular units but included hardwood spears launched using throwers, arrows, javelins, slings, the bolas, clubs, and maces with star-shaped heads made of copper or bronze. The favourite weapon seems to have been the palm-wood club which was shaped like a sword and had a double-edge. Large stones were also employed to roll down on the enemy and grass fires if the terrain was suitable. Protection was provided by hide rectangular or trapezoid shields, helmets of plaited cane or wood, and metal plates over the chest and back or tunics of quilted cloth which were both resistant and light to wear.

Besides weapons, troops were issued with a set of clothes, sandals, a blanket, and some foodstuffs such as maize, peppers, and coca leaves. Soldiers would put on their best finery for battle such as extravagant feather headdresses and burnished silver or copper breastplates. Soldiers might also wear decorations of their previous escapades such as necklaces made from the teeth of enemies and copper or silver medallions given as rewards by their commanders. The great strength of the Incas in warfare was not technological superiority or better fighting tactics than the enemy but their great preparedness and hitting the enemy with overwhelming numbers. Before battle, though, it was a common tactic to send messengers to the enemy offering favourable terms of surrender and promising rewards to the leaders who would be allowed to continue in their positions of power. Further, the community would not be robbed of all their resources as long as they pledged allegiance to the Inca king, accepted the Inca sun god Inti as the supreme deity, and offered regular tributes both in goods and labour. A huge area of the Upper Mantaro Valley was conquered in this way without any bloodshed whatsoever.

On the other hand, if the enemy insisted on battle, the Incas would mobilise their superior numbers, wipe out the opposing army without mercy, and deport as many of the conquered population as possible, effectively erasing the city from the archaeological record. Areas dealt with in this way included Tunanmarca, Canete, and the Cayambe people in Ecuador. Those areas, such as around Lake Titicaca, which repeatedly displayed rebellion were pacified from within by relocating Inca sympathetic populations to them.

On the battlefield actual engagements were preceded by both armies singing songs and hurling insults at each other, a process which could take several days. When the battle started proper, attacks were either front-on over open terrain or siege warfare. Spies were sent before the battle to ascertain the lie of the land, and the Inca army usually struck in a single mass unit with some troops left in reserve in case they were needed to protect a retreat. Two often repeated tactics which proved very effective were pretended withdrawals and counter-attack pincer movements.

To maintain an empire which stretched right down the western coast of South America and permit the rapid deployment of troops wherever they were needed, the Incas built a network of fortresses connected by an even more extensive road network. At regular intervals, routes were punctuated with waystations so that troops need march no more than 20 kilometres without fresh supplies. Goods were also transported by carriers – both llamas and people, including women. Generally, campaigns lasted several months and troops needed feeding and shelter. Food and arms were available from the Inca storehouses, the qollqa, which dotted the countryside. To ease the burden on local communities, they were warned beforehand that the army was on its way and the troops moved in staggered groups so as not to all be in the same place at the same time as they marched to the battlefield. Further, any local looting by soldiers was punishable by death.

As the empire expanded and so became ever more taxing to police, the Incas were obliged to maintain a permanent presence in the territory they conquered. This necessitated the construction of fortresses, establishing garrisons, and fortifying borders. Forts were typically built at strategic passes and routes likely to be used by invaders in the border areas, especially in the area around Quito where the remains of 37 Inca forts have been identified.

As Andean warfare did not include explosives, large projectiles, or siege engines, fortresses were often simple affairs consisting of a walled enclosure built on a hilltop. They could not shelter a large number of soldiers indefinitely, troops usually slept in tents when not under attack. Walls were built in concentric circles but also included sharp bends to increase the angles from which to fire sling stones on attacking forces. Sometimes extra protection was provided by a moat, revetments, and gates with multiple and offset doorways. To the victors go the spoils and the coffers of the Inca king were enriched by war-booty. Those soldiers who had displayed great valour were given rewards depending on their status. These prizes included land, the right to sit with the king, prestigious administrative positions, gold and silver breastplates, fine clothes, captured women, weapons, and livestock. Defeated enemies were taken as captives to Cuzco and paraded before the people, much like in a Roman Triumph, with the Inca king ceremoniously stamping on the head of his defeated counterpart. Some leaders would be sacrificed and particularly hated foes had their skulls made into ornate drinking cups and their skins made into drums. The Incas also captured the sacred objects of a conquered people, symbolically imprisoning them in the Coricancha complex at Cuzco to ensure compliance from the population.

The Incas seem not to have recorded the defeats they suffered, although given their superior discipline and numbers any setbacks were likely only temporarily. The Incas did, of course, meet more than their match when the Europeans arrived with their cavalry and firearms. Their fall was not sudden, though. After initial dramatic defeats and the loss of their king, the Inca actually won some battles and resisted the superior armed invaders for another 50 years. The Spanish would ultimately be victorious but they would also find out exactly how difficult it was to maintain control over a huge empire encompassing all kinds of terrain and hundreds of different cultures spread over thousands of square kilometres.

MARK CARTWRIGHT
Mark holds an M.A. in Greek philosophy and his special interests include the Minoans, the ancient Americas, and world mythology. He loves visiting and reading about historic sites and transforming that experience into free articles accessible to all.