Putting ‘weird’ grammar on the map 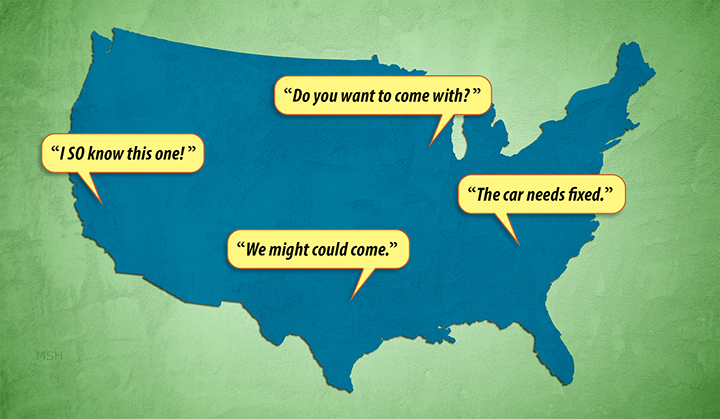 Researchers are working to document sentences like “Here’s you a piece of pizza.” Though it sounds totally normal to some English speakers in the United States, it strikes others as totally bizarre.

The Yale Grammatical Diversity Project explores the diversity found in varieties of English spoken in North America by documenting the subtle—but systematic—differences in syntax, the study of how phrases and sentences are put together.

“Unlike variation in phonology (often referred to as “accent”) and in the lexicon (“skillet” vs. “frying pan” or “soda” vs. “pop”), variation in grammatical systems within English has for the most part not been systematically investigated,” says Larry Horn, professor of linguistics and philosophy.

This “variation may be found among speakers who live in a certain geographical region, or who belong to a certain age group, or to a particular social or ethnic group,” notes Horn. Examples of these constructions are included on the project’s website.

THE ‘MENTAL RULES’ WE USE

Another goal of the project is to create an awareness of dialect variation in a way that is non-judgmental and interesting.

The researchers aren’t interested in what is considered to be correct—or prescriptive—grammar, but in what people do naturally.

“The notion of correct is something that is artificially placed on a system that exists, sort of like putting your fork on the left side of the dish versus the right side, whereas the kind of language we are interested in is just what people do naturally,” says postdoctoral associate Jim Wood, a lecturer in linguistics.

“Independent of what is considered to be correct,” says Wood, ” there is a set of mental rules that people are using to form their sentences. We are not really aware of these rules because they are internalized. We hear someone say something, we acquire that rule, and we apply it. What we are trying to do with this project is to understand such rules, and how they relate to other rules in that person’s mental grammar.”

THERE’S NO ‘RIGHT’ WAY TO TALK

Linguistics Professor Raffaella Zanuttini adds that there is also a social implication to this research. “Often people are convinced that there is a right way of speaking a language and a wrong way of speaking that language. From the point of view of a linguist, that is really off the mark for many reasons,” she says.

“It is important that people who criticize others for how they speak realize that they are really using language as a way of conveying a social prejudice. If they hear the Queen of England pronounce a word without an “r,” they think it’s fancy. But if they hear somebody from the North End of Boston or someone from Brooklyn who comes from a working-class background pronounce the same word without an “r,” they think that person is beneath them.”

“We linguists can see through this, because we have a more scientific approach to language,” says Zanuttini. “We believe that creating an awareness of what we consider to be basic facts about language can have a positive social effect, by making people aware that they are expressing a negative evaluation of others.

“However, we are not saying that it’s not useful for people to also have command of the standard, that is, the prescribed variety of English.

“We would never encourage someone to go to a job interview and not speak the variety of English that is considered the standard, the most appropriate variety for that context in that community,” says Zanuttini. “Rather, we encourage people to gain mastery of the standard variety, while at the same time also taking pride in other varieties of English that they might speak.”

During the past year members of the project have been conducting nationwide surveys using an online crowdsourcing platform asking for people’s judgment on sentences. They plot the results on a map.

One of the most interesting discoveries that the group has encountered are presentative sentences like “Here’s you a water bottle.”

“That sentence just floored me,” says Wood. “It seemed very alien and different to me. The overall pattern was very clear: In the South people found that sentence to be completely normal, while in the North, no one thought it was normal. It was pretty stunning, and it turns out you can do it with ‘where’ as well. ‘Where’s me a screwdriver?’ or ‘Where’s me a place to eat around here?’”

“Grammar is always changing,” says Wood. “Why not celebrate that we don’t speak a static language that is in a book, but a fluid thing that is always changing and evolving? It’s part of what it means to be a human who speaks a language. And the next person over is just going to speak it a little bit differently.”

featured, language, regional
Previous Post Guest Voz: It’s Up to You — Does Cristela Go or Not!
Next PostOfficially Unofficial: The evolution of Mexico's student protests

Guest Voz: It’s Up to You — Does Cristela Go or Not!
Comment
Officially Unofficial: The evolution of Mexico's student protests