Latina Lista: News from the Latinx perspective > Columns & Features > BlogBeat > Why only now – after 51 years – war is ending in Colombia

Why only now – after 51 years – war is ending in Colombia 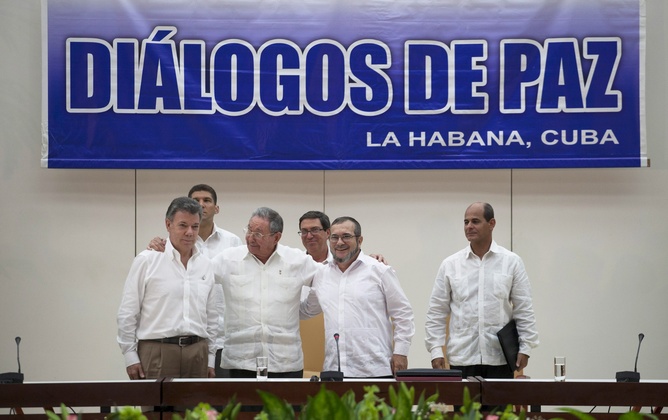 By Nazih Richani
The Conversation

Colombia’s civil war is finally winding down. Over the past 51 years, it has killed over 250,000 people and displaced over five million. It has caused havoc in the rural economy and the environment.

But now – after four years of difficult talks in Havana, Cuba between the Colombian government and the Armed Revolutionary Forces of Colombia (FARC) – the country is on the brink of peace.

Why has peace been so elusive for more than a half-century? What is it about the present moment that has enabled this breakthrough?

The answer, I would argue, lies in Colombia’s socioeconomic history. To paraphrase the 1970s catchphrase, one needs to “follow the money.”

For decades, the political situation in Colombia was at an impasse for the simple reason that the principal players – the powerful business and political elite and the insurgents – were able to coexist and grow despite the discomforts of a low-level, asymmetrical civil war.

On the one hand, the dominant elite resided in the major cities and enjoyed the protection of the state, defending their businesses alongside what was deemed the country’s strategic resources: oil and coal. Wealth was concentrated in very few hands. According to French economist Thomas Pikkety the top 1% in Colombia accounted for 20% of the nation’s income between 1990 and 2010.

On the other hand, the rebels operated in peripheral rural areas where they affected only a segment of the elite: large cattle ranchers and agribusiness.

Yes, there were a few flare-ups, such as the 1990 bombing of the FARC’s headquarters in Casa Verde, but until 2000 the consensus within the dominant classes was that the costs of war were less than the expected costs of a negotiated peace, especially since the latter could involve painful reforms such as a redistribution of land and wealth. In the words of the president of ANDI (the National Business Association of Colombia):

The economy is doing well but the country is not.

This is why, in my view, the negotiations launched with great fanfare in 1999 – and a personal visit to the headquarters of FARC – by President Andres Pastrana failed.

The erosion of the “comfortable impasse” was kickstarted by two developments.

First, and most importantly, in 2000 the US decided to intervene directly in Colombia’s civil war through Plan Colombia, an initiative conceived at the end of the Clinton administration to combat both the left-wing insurgency and drug cartels. In the intervening years, the US spent over $8 billion on the plan and dispatched an unspecified number of advisors to Colombia. (Plan Colombia is still in effect, but the amount of military aid declined to US$280 million in 2015).

The other “game changer” was the creation, in 1997, of an irregular army of more than 20,000 paramilitary soldiers. These militias were funded by narcotraffickers, cattle ranchers, agribusiness groups, local elites, and last but not least multinational corporations.

The right-wing paramilitaries carried out a typical counterinsurgency, “scorched-earth,” strategy – expelling people from their homes, committing countless massacres, destroying crops and sources of livelihood that might be useful to the guerrillas.

These two factors altered the dynamics of the conflict, escalating its intensity, scope and magnitude. The number of combat-related fatalities increased significantly, as did the number of people displaced from their homes.

More than 70% of the five million people made homeless during the civil war were uprooted during this period.

Both these developments strengthened the Colombian state, but the insurgency was far from defeated.

FARC and its smaller ally, the Marxist National Liberation Army (ELN) adapted new tactics to elude their enemy who was increasingly using air power and surveillance supported by the US military. The insurgents redeployed their forces to create smaller, more mobile and more flexible tactical units. They used more sharpshooters and land mines. As a result, the ratio of combat-related fatalities between the Colombian military and the insurgents changed too. In 2002 for every one combat fatality caused by FARC, there were 2.41 caused by the Colombian military. By 2010 that ratio had been reducedto 1 to 1.3.

The civil war was moving to a new resting point of equilibrium ushering in a new, less comfortable, stalemate.

In 2012 Simon Gaviria, president of the Liberal Party, a close ally of the present president Juan Manuel Santos, presented findings that estimated that the costs of war over the previous decade had reached an astronomical 206 billion Colombian pesos (or US$108 billion).

This number was presented as a critical part of the rationale behind the peace initiative launched by Santos in that same year.

It was also a critical indicator of an emerging consensus within a sector of Colombia’s urban bourgeoisie that the heavy military investment and effort of the past decade had reached the point of diminishing returns. Heavy US involvement had weakened but failed to defeat the insurgency. The insurgency was able to adjust and build up its strategic depth outside Colombia, in Venezuela and Ecuador.

What was also clear was that the Colombian economy could not possibly sustain the rising costs of armed conflict for an indefinite period.

By 2014, its military had 500,000 personnel (including police), the largest force in Latin America. But the cost of armaments and operations were dwarfed by that of pensions, health benefits and wages.

Gaviria’s argument was that if the war were allowed to drag on for another decade, the costs could run as high as another $108 billion. The time had come to test the ground for negotiations with FARC. This testing was made easier by Colombia’s improved relationship with Venezuela’s ailing leader Hugo Chavez. Upon his election Santos approached Chavez who in turn contacted the FARC. Secret meetings turned into a first formal negotiation in Norway in 2012 and then 30 rounds of talks in Havana.

So how about the other party at the table? What led the FARC to accept to negotiate?

One key factor that was decisive was Hugo Chavez. Chavez’s success in Venezuela alongside the emergence of progressive political regimes in Ecuador, Bolivia and Uruguay convinced the FARC that change is possible through the ballot box rather than by bullets. Ironically, the FARC did not have the same economic worries as the Colombian government, thanks, among other things, to their extracting protection money from narco-traffickers alongside mining for gold and other resources. Now that money will be used for launching its political movement.

With the prospects of a lasting peace around the corner, the economic picture changes. Most importantly, in my view, Colombia will be able to cut down on its military budget and allocate the saved money into a more useful development strategy that can help consolidate peace.