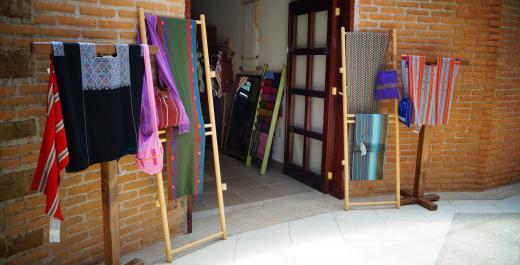 “To be an artisan, to be a weaver signifies tradition, the culture,” she says. “We wear our dress. I never have taken it off.”

But she says that local interest in buying traditional clothing has been waning in Chiapas, Mexico’s southernmost state, threatening her culture.

“In many municipalities, they no longer wear their dress or know how it was,” she says. “If it is lost, the tradition is not known anymore.”

Initiatives to promote weaving have shaped her life, she says. In turn, she is working to preserve and develop this traditional craft.

Sánchez, a mother of two sons, serves as the president of Cooperativa Jolom Mayaetik, a cooperative of indigenous women who weave and sell their products around the world. In the Tzotzil language, “Jolom Mayaetik” means “Those Who Do the Weaving.”

By joining the cooperative in 1999, Sánchez became able to preserve her culture through weaving and to seek fair prices for her work by organizing with others. It also offered her the opportunity to learn new skills and to participate in a globalizing world.

“When I arrived, I did not speak Spanish,” Sánchez says, referring to when she joined the cooperative. “I only knew how to answer, ‘Sí.’”

She learned many things, she says, including how to use a computer, write checks and mail packages. She also got to travel.

Sánchez, who grew up in the municipality of San Andrés Larráinzar, first moved to a different municipality, San Cristóbal de las Casas, where the cooperative is located and she lives today. Later, her work with the cooperative took her to other parts of Mexico and then the United States.

Sánchez has now been president for six years. This role has taken her to the U.S. cities of Baltimore, Chicago, Los Angeles and New York to promote and sell the cooperative’s work.

“Sometimes I get nervous because, what if I get lost?” she says. “But I return well. Before, I could not speak in front of people, but now not anymore.”

Sánchez has 33 years of weaving experience that she contributes to her role of keeping the traditional craft alive.

“It is very important to learn to weave because it signifies not losing our culture,” Sánchez says. “Because if we do not do our weaving, the culture is lost.”

Weaving has long offered employment to indigenous women in Chiapas, but departure from traditional dress in recent years has hurt their sales locally. Cooperatives and other organizations are therefore enabling the craftswomen to develop new skills and to collaborate to market their goods internationally. The women are adopting innovative designs to express the evolution of their culture and to attract fresh customers. A new fair trade e-commerce platform may connect them with expanded markets so they can increase their sales and can preserve their indigenous culture.

Indigenous people constitute 25 percent of the population in Chiapas, according to the state government. Altos de Chiapas, or the Chiapas Highlands, are home to large Tzotzil and Tzeltal populations, both Mayan ethnic groups.

There are at least 300,000 artisans in Chiapas, and 60 percent are women, according to the Instituto de las Artesanías in its 2007 to 2012 plan. The state institute, now called Instituto Casa Chiapas, aims to revitalize, preserve and promote craftsmanship in Chiapas.

In indigenous culture, girls learn to weave between ages 8 and 10 from their mothers, Sánchez says. Weaving offers a form of employment for women.

But finding markets to sell the woven goods so the craftswomen can earn a living is challenging. Locally, fewer people are wearing traditional clothing, Sánchez says. Moreover, bargaining forces weavers who sell their work in the streets to vend their goods for low prices.

To find markets for their work in which they can earn fair prices, some women have organized into cooperatives.

“For me, it is important to be part of a cooperative so that they know us in other countries and to be able to sell our products,” she says.

Through the cooperative, the women and their daughters also have access to workshops that are helping them to improve their craft sales.

Marla Gutiérrez is a member of K’inal Antsetik, a nonprofit organization that works with and for indigenous women in three regions of the state. K’inal Antsetik, which means “Land of Women” in Tzotzil, functions as an advocacy and support group for female indigenous artisans in Chiapas.

Cooperativa Jolom Mayaetik is one of five groups that K’inal Antsetik works with to assist the women with their goals of international commercialization. One of the main services the organization offers is workshops on new craft techniques for the production and commercialization of textiles, accounting, health, quality control and human rights.

In addition to joining cooperatives and taking advantage of workshops, the women are innovating new designs to attract more customers.

“Craftsmanship is living culture,” Gutiérrez says. “It is changing. It is not static. The women change designs. Among them, they advise each other. There are artisans who deliver many products. There are others who are artists and are creative all the time with new designs, bold colors.”

The women’s garments are full of traditional multicolored designs and symbols that unfortunately the younger community members no longer know, Gutiérrez says. But they are organizing themselves into cooperatives to learn and to advance them.

“The designs signify their identity and are changing,” Gutiérrez says. “They change because you see different things and you want to replicate them.”

Sánchez says the members of Cooperativa Jolom Mayaetik are using new designs and colors to modernize the traditional clothing.

“It is the idea of the women the changes of colors,” she says. “The new combinations are made to sell because the people do not buy the traditional ones as much. They buy new designs. A large ‘huipil’ is no longer worn. They like the other models more.”

The term “huipil” in Tzotzil refers to the loose-fitting, colorful tunics that indigenous women have traditionally worn. Younger generations prefer new styles of huipils that are smaller and more modern.

Still, the artisans face challenges. Cooperatives can accept a limited number of members in order to preserve wages for members, Sánchez says. Women’s sales have declined, though some can earn enough to buy their food.

Gutiérrez says that the work empowers women economically, but the money they can make is limited. They would have to work on machines to be able to produce and earn more.

To confront challenges like this, two young Spanish entrepreneurs are creating a new platform to expand the women’s market.

Daniela Ferrer and Fátima Ahogado created a fair trade e-commerce platform called Huipil that they are launching this year to market handicrafts internationally for indigenous craftswomen.

Ferrer and Ahogado recently visited Cooperativa Jolom Mayaetik to view the women’s products and to see how they could work with the artisan group to sell their products online.

“We want to rescue and recognize the traditional work,” says Ferrer, who lives in Mexico City, the nation’s capital.

They want to introduce alternative uses for traditional garments to consumers, not just to wear but to decorate their homes, Ferrer says.

“We want to specialize in the sector of decoration,” she says, “utilizing the looms, and that the families live with these fabrics and they feel proud to have them and that they tell the story of the artisans who produce it.”

Interviews were translated from Spanish.

culture, indigenous, Mayan
Previous Post Guest Voz: Mermaids in America. Or, how does this Ecuadorian girl end up writing fantasy?
Next PostViernes Video: Filmmaker goes beyond the fence at the U.S.-Mexico border to reveal a 'purgatory' where souls wait…

Guest Voz: Mermaids in America. Or, how does this Ecuadorian girl end up writing fantasy?
Comment
Viernes Video: Filmmaker goes beyond the fence at the U.S.-Mexico border to reveal a 'purgatory' where souls wait…