Latina Lista: News from the Latinx perspective > Columns & Features > Guest Voz > Guest Voz: Mermaids in America. Or, how does this Ecuadorian girl end up writing fantasy?

Guest Voz: Mermaids in America. Or, how does this Ecuadorian girl end up writing fantasy? 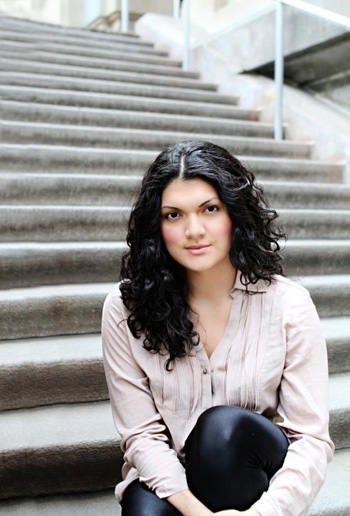 I’m Zoraida Córdova, and this post is a can of worms. I wish they were tequila worms, but I don’t think those are allowed in YA (young adult). (just kidding.) I’ve been starting and stopping this blog post, mostly because there is so much to say, and sometimes I don’t know how to say it. I want to talk about race and writing and the place of race in writing.

Then again, race is a funny thing. Not ha-ha funny, but uncomfortable funny. We don’t want to talk about it; not really. We want to pretend like it’s a thing of the past and it isn’t. It’s in the mirror every time I look at myself (and that’s quite a lot), it’s when I walk into an Upper East Side clothing store to shop for a dress and a nice white lady asks me to find a size for her. There’s the “I don’t work here,” followed by the uncomfortable apologetic laugh. See? Funny.

So let’s put aside the race thing for a second and talk about me.

My decision to pursue my writing career was met with a lot of raised eyebrows. My immigrant family didn’t understand why I wouldn’t want to be a lawyer or a doctor. The thing is, unlike my other immigrant friends who were pushed and forced into law school and engineering, my family didn’t put a break on my creative pursuit. I’ve always thought they were fucking crazy to do that, but I love them because of that.

My family is untraditional. We are Ecuadorian. I can’t tell you much about Ecuador. I can’t list any historical dates, president’s names, or famous heroes. Basically, our claim to fame is giant turtles from GALAPAGOS and half of Christina Aguilera (the half buried under the blue contacts and bleached hair. Check out her nose. That’s totally Ecuadorian.) See? You don’t know shit about Ecuador and that’s okay because I don’t either.

When we came to New York we lived in a nice part of Hollis, Queens. I didn’t grow up in the Barrio or the Hood. I rarely left my house so in that sense, I was overprotected. So I stayed home and listened to my angsty alternative rock music and wrote poetry and read books about vampires and witches. I didn’t think about myself as “un-American” or a “minority” because sure, there are not a lot of Ecuadorians in this country, but I am not LESS THAN anything. It wasn’t until people started asking me things like “why do you act white?” “why do you talk like a white girl?” “why do you listen to white people music?” “why are you in my class you spic?” (And it was another minority girl who asked this last one.)

I didn’t know what a spic was. Even when I watched West Side Story for school, it just seemed like old-timey curse words. I wasn’t aware of my Other-ness until the people around me made me aware of it. I made a very clear decision to not hang out with the “Latin” kids in school. Instead, I gravitated to the skaters and misfits who didn’t fit in their brown skins either.

And then I started writing. My first short story was called (pause) “Final Heartbreak” and it was about a group of high school friends and their drama. First I want to remind you that my name is Zoraida Cordova. All of my friends were Guyanese, Jamaican, Black, and Philippino. There wasn’t a single one among us with blond hair or blue eyes. And yet, every single one of my characters (based on each one of my friends and myself) I describe as having light eyes and pale skin. At one point I wrote “Johnny’s black hair and green eyes shone under the lights.” “Pacey’s gray sweater matched his eyes.” “Pacey was Australian but didn’t have an accent.” (Pacey was also the only made up character. My imaginary boyfriend.) During the climax of “Final Heartbreak,” I introduced Egyptian twins (keep in mind I was 12-13) and I wrote:

“Then four shadows appeared at the door. As they came closer, you could see that it was Johnny, Courtney and Courtney’s friends Rachel Greek and Ian Greek. Ian and Rachel were brother and sister. They were Egyptian but came to the US when they were a few months old with their parents. Their parents were rich and had a successful company of computer software. Their skin was very fair and had a golden tone…”

So okay, laugh. Please do, because I’m laughing. Like I said, race is a funny thing. I haven’t read this story in 15 years! But if we get shrinky-with-it, we can see what is obvious in my early work: the lack of diversity. The only reference to foreign characters is REALLY foreign, and I make it a point to single them out. When I read E.C. Meyer’s piece on Diversity in YA, I was nodding the entire time. Especially when he said “The books I read and the shows I watched almost universally featured white main protagonists, with people of color usually cast in the role of sidekicks or incidental characters.” The TV I watched were Buffy the Vampire Slayer, Dawson’s Creek, Felicity, Saved by the Bell (thank you Lisa Turtle), Charmed, Sabrina the Teenage Witch and ALL OF THE OLSEN TWINS MOVIES. Like, all of them.

This list, all of it, it influenced my first works by white-washing everyone I knew. My home life and friend life was full of diversity. Hell, I’m full of diversity. On my mother’s side we have Spaniards, Afro-Caribbeans, and one Chinese ancestor. On my dad’s side we have Spaniards and Italians. All of them became Ecuadorian and through them, I became American. Or a mermaid. Yes, I became a mermaid.

Naturally, after I graduated and went into the real world and kept writing, my characters remained white. It’s ingrained in my psyche from 25 years of television and movies (Latin TV has the same problems as American TV, but that’s another can of tequila worms). In a recent convention, out of 78 YA authors, only two of us were non-white. A girl came up to me and said, “Thank you for making the love interest half-Ecuadorian and half-Greek.” Another girl at the same convention said, “we’re so excited you’re here because there aren’t many Hispanic authors.”

The same way I was made aware of my other-ness in high school, I’m becoming more aware of it as an author. I used to think of myself as writing fun stories, oh look at my mermaids swim! Now, as I watch my writing change, I see how my choice of making a non-white love interest might have allowed this reader to see herself in a book. And not in a “racial” way. Layla Santos of THE VICIOUS DEEP trilogy is not bi-racial to prove a point. She is bi-racial because I felt like it. Because I wanted to put some of me in my work. Because it’s not Lena Dunham’s Brooklyn, and I would be misrepresenting my city by only having white characters.

I notice things in my fiction, THE SAVAGE BLUE, in particular that I didn’t notice before. Tristan Hart, my protagonist is half white Brooklynite and half merman. I wanted him to transcend race and species. Tristan literally belongs in two worlds and he has to make them both work in order to continue with his life.

For me, writing urban fantasy allows me to write about this dual sense of belonging which all teenagers struggle with no matter where they come from. And there is nothing funny about that.

(Editor’s note: This post originally appeared on Diversity in YA)

Zoraida Córdova was born in Guayaquil, Ecuador, where she learned to speak English by watching Disney’s The Little Mermaid and Michael Jackson’s Moonwalker on repeat. Her favorite things are sparkly like merdudes, Christmas, and New York City at night. You can find her at
www.zoraidacordova.com and
https://www.facebook.com/CordovaBooks