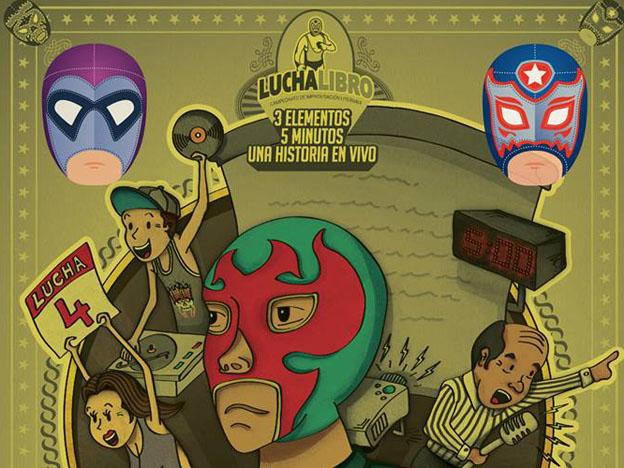 Lucha Libro is one of those ingenious, unexpected ideas that just can’t help but turn heads. Like its namesake “lucha libre,” the wrestling done by masked combatants in parts of Latin America, Lucha Libro is a battle. However, instead of using their fists, these fighters use the written word.

Basically, Lucha Libro is a literary improvisation contest. Writers appear on stage, using pen names and wearing typically colorful masks like those worn by lucha libre fighters. They’re given three words and five minutes. Their task is simple: write a short story with those three elements in five minutes. Each round pits two bemasked writers against each other. At the end of the round, contest organizers announce a winner who will advance to next week’s competition.

The champion of the Lucha Libro tournament is awarded a highly coveted prize: a book contract.

The contest has attracted positive attention from media outlets such as Time magazine, Media Bistro, and Public Radio International. Writer Paul Constant asked on Seattle-area website The Stranger “Can someone bring Lucha Libro to Seattle? […] I think this could be a good way for young writers to make a name for themselves.”

Lucha Libro is just about wrapping up its 2013 competition, but you have one more chance to get in on the action. The final round, which will decide this year’s winner, is taking place on Saturday, Oct. 5, at 8 pm in the Centro Cultural de España. Check it out— who knows? You might just get to witness the literary birth of Peru’s next great writer.

literature, Peru, writing competition
Previous Post Why Is The Monarch Butterfly Population Shrinking?
Next PostViernes Video: BABYGIRL — When mijas have to grow up too fast

Why Is The Monarch Butterfly Population Shrinking?
Comment
Viernes Video: BABYGIRL — When mijas have to grow up too fast