Latina Lista: News from the Latinx perspective > Columns & Features > Global Views > The Scream was inspired by a Peruvian mummy

The Scream was inspired by a Peruvian mummy 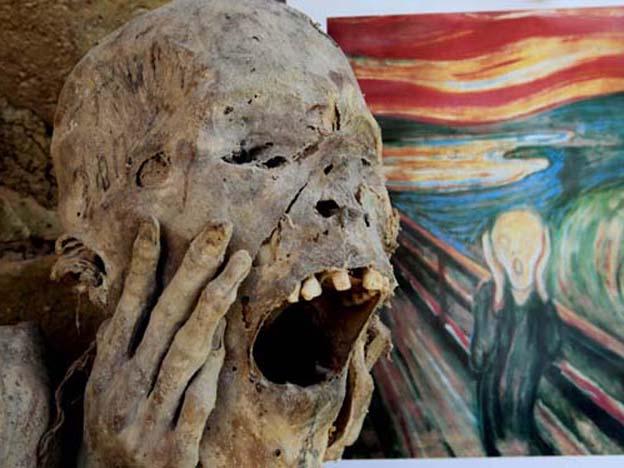 Munch’s famous painting was based on a Chachapoyas mummy discovered 130 years ago in Amazonas.

We’ve all seen Edvard Munch’s ‘The Scream.’ The famous painting by Norwegian artist Edvard Munch is one of those pieces that, once you’ve seen it, stays with you for the rest of your life.

Writer Arthur Lubow, in an article for art and culture magazine, Smithsonian, describes it as a painting that embodies our age as much as Leonardo da Vinci’s Mona Lisa expresses the Renaissance archetype of calm and serenity.

“Munch defined how we see our own age — wracked with anxiety and uncertainty. His painting of a sexless, twisted, fetal-faced creature, with mouth and eyes open wide in a shriek of horror, re-created a vision that had seized him as he walked one evening in his youth with two friends at sunset.”

Well, according to several art historians, the terrified figure in The Scream is actually based on a Peruvian mummy.

The story dates back 130 years, to when the mummy of a Chachapoyas warrier was discovered near the Utcubamba river in Amazonas. According to art historian, Wayne V. Anderson, the mummy first inspired Paul Gauguin, who spent his early childhood living on the outskirts of Lima. Anderson suggested this hypothesis in 1967 and in 1973, it was confirmed by German investigator Stefan Ziemendorff, who found a book of sketches of the mummy drawn by Gauguin in the Louvre museum in Paris.

A decade later, art historian Robert Rosenblum established that Munch’s famous painting was also based on the mummy. The Scream was inspired by a vision that the artist had one evening when walking with his friends at sunset. In his diary, Munch wrote,

“…The air turned to blood [and the] faces of my comrades became a garish yellow-white.” He wrote that he heard “a huge endless scream course through nature.”

Munch tried to recreate the image that had haunted him that day, but didn’t quite manage to capture it, so he used a Peruvian mummy that he had seen in a Paris exhibition to paint the first version of The Scream. Nothing’s quite as good at a silent scream as a mummy!

The artist died alone at 80, surrounded by his paintings that he called his children, in 1944, but today his most famous piece – and a piece of Peruvian history – lives on in the unusual gift of more than 700 Scream themed baubles for the Washington Union Station’s Christmas tree.

Every year, the Norwegian embassy in Washington decorates the tree as thanks for U.S. assistance during and after the Second World War. This is the 16th year that the embassy has been responsible for decorating the tree and this year, the decorations will be slightly different.

To commemorate the 150th anniversary of Edvard Munch’s birth, 700 Scream baubles have been commissioned for the tree. That’s right: 700 tiny screaming men will be hanging fesively from the tree.

Ambassador Kåre Aas explained the curious choice of decorations in an interview with the Washington Post.

‘In a way, it symbolizes all the angst in preparing for an excellent Christmas,’ she said.

‘I, myself, have that feeling. I’m not the only one who wants to scream from time to time.’

This year, Washington’s Norwegian Christmas tree won’t look quite as festive, but the memory of Peru’s mummy will live on in the face of 700 palely glowing Christmas decorations.