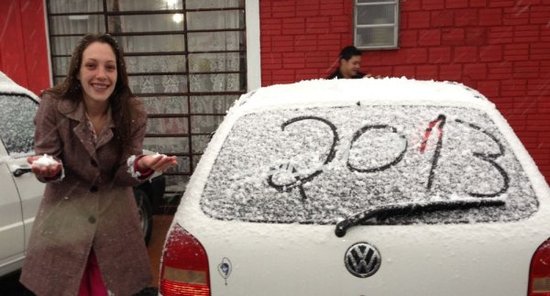 The picture looks like it could have been taken in some awesome and cold place in Europe, right? But that can’t be. It’s summer time there now. In fact, just yesterday, people waiting for word of the birth of the royal baby had to stand around in sweltering heat, the hottest day on record in seven years in the UK.

So maybe it was Alaska or Siberia?

Not only there, but also in more than one hundred cities in the southern states of Brazil — Paraná, Santa Catarina and Rio Grande do Sul.

Needless to say, the sight of snow brought out the inner child in people who got very excited. After all, snow on the ground is not a very common landscape in a so-called tropical country.

Cities such as Guarapari, by the sea, where people are used to spending the summer sun bathing, were caught by surprise with a delicate white cold layer of snow covering the city.

It wasn’t long before social media became loaded with pictures of white fields and roads, and improvised snow men.

The temperatures, at this time of the year, in southern Brazil usually reach 0C, something close to 30F. Yesterday, the official lowest temperature was -4C, something like 24.8F.

The amazing thing about all of this is that, not so far away from the city of Curitiba, there were some cities living up to Brazil’s sunny reputation, just like always.