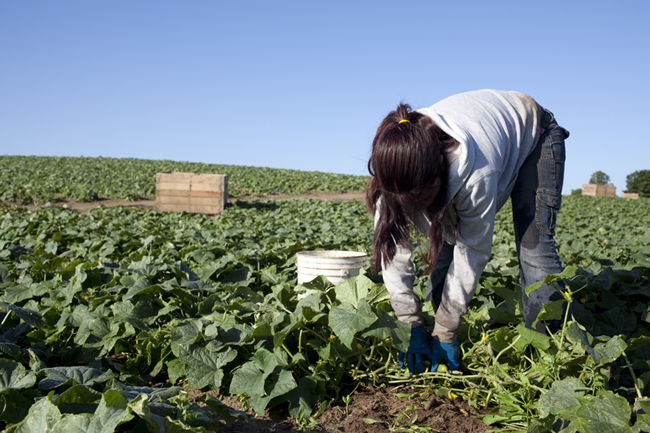 The rhythm of the crunching dry soil slowed and eventually came to a halt with a big crash.

The girl’s uncle heard and crossed through three rows to find her motionless body face-up. It was a calm day, and the air could not have been any more still, but panic surged through the workers as the girl’s uncle cried for help.

At the sound of his desperate voice, several workers began rushing and swatting through the corn plants where the uncle was holding the girl up on his knees. Every worker took a limb, and they carried her body out of the corn field. Once away from the tall corn plants co-workers swayed their sombreros across her face hoping she would regain consciousness. Her closed eyes and her head hanging with no support instilled fear in her uncle and every worker.

That morning she went to the field calm, sleepy, and ready to work but left with sirens wailing.

Data collected from the Center for Disease Control and Prevention indicates that heat-related deaths among migrant farm workers may be increasing. Instances of migrant workers fainting and dying from heat stroke have been more frequent in recent years.

I have been a migrant farm worker for eight years. I first started when I was 11 years old. I remember working the fields and being able to finish what the company planned for the day. We began at six in the morning while the crops wore fog as a blanket, and we usually finished tired, sore, and hungry at around 4 or 5 p.m.

Now, the story is different. Hotter temperatures force my co-workers to quit by noon, many of them by 10 a.m.

The reason why fellow workers are no longer able to continue working throughout the day can be linked to the increase in temperatures which we acquired through polluting our earth. Some stop performing their field work by choice and others are forced to stop by the heat (i.e. faint, heat stroke, heat cramps, and heat exhaustion).

According to the Bureau of Labor Statistics, field labor is ranked among the top three most dangerous occupations. The factors that make field labor dangerous are pesticides, pollen, cancer, and now intolerable heat.

In my experience, the fields were not being processed by workers on schedule. It was obvious why. By noon everyone murmured “Esta muy caliente,” meaning it was too hot.

Climate change fueled by carbon pollution and other gasses is what causes heat temperatures to rise according to NASA. Now with bodies dropping and others dying from heat, what awaits in the future?

Who will be willing to risk their lives to tend the fields and make it possible for stores to fill their shelves? Who will make it easier for you to have produce on your plate at dinner time?

We have bigger issues though.

Rising temperatures also diminish the amount of produce farmers are able to harvest. With droughts, the dry soil isn’t fertile enough to sustain sufficient crops. The prices for agricultural produce doubled from 2005 to 2007 due to droughts, according to the Organization for Economic Co-Operation and Development.

People in our society who live in poverty are only going to struggle more if we do not develop a plan to deal with climate change. With continuing droughts that affect production, the number of migrant workers in Hidalgo County living in poverty will only grow, making it difficult for Hidalgo County to prosper.

I have recently seen many workers faint. I have developed a fever with throbbing headaches while working in the fields in the summers of 2009 and 2010. I have felt the panic when trying to help a co-worker whose body no longer withstood the heat. The fields sometimes seemed like a battlefield where at times two people fainted around the same time.

There are many obstacles migrant workers face all over the U.S. and factors that accompany climate change are slowly but surely rising to the top of the list.

Not everyone feels the effect of climate change as migrant field workers do. It’s hard to feel temperatures rising when the AC in your room or office is running all day. It’s hard to see a decrease in production when all your produce is acquired through your local grocery store. Migrants know firsthand the effects of climate change more than others. To me, that is environmental injustice.

We need to change the path that we are on as a society. We need to stop living in the moment and switch to the mitigation lane and prepare for the future. In our capitalist system, people tend to follow the same patterns they always have — to seek profit for their benefit only.

We need a change.

We are traveling down a deadend road, and there are not many exits left that we can take. From now on, let’s make brighter choices, and bold moves that will benefit us all.

Osvaldo Lopez’s experiences as a migrant farm worker pushed him to pursue his education. He is currently enrolled at the University of Texas-Pan American studying criminal justice. After getting his bachelor’s, he plans to attend law school and become an attorney in order to fight for social and environmental justice for all.

The above guest column is part of a series on environmental issues the Rio Grande Guardian is running in association with UTPA.