Guest Voz: When Harry Truman Took Executive Action, “He Used His Pen And We Celebrate His Courage Today” 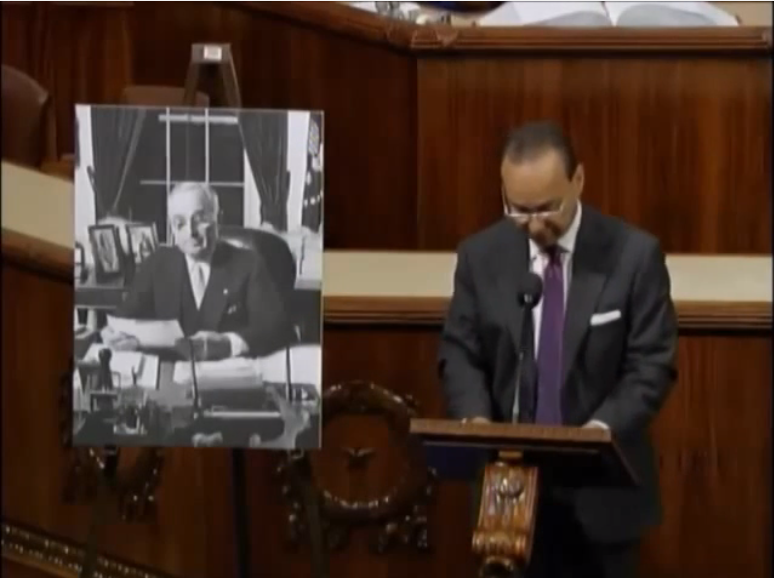 This morning during the 10 a.m. hour (ET), Rep. Luis V. Gutiérrez (D-IL-4) spoke on the floor of the House of Representatives on immigration and the President’s decision to take executive actions on deportations and other immigration matters.

Standing before a portrait of President Harry S. Truman, Congressman Gutiérrez described how the Midwestern Democratic President had bucked members of his own party to desegregate the U.S. military via executive order after World War II.

Rep. Gutiérrez concluded that after President Obama takes action on immigration as expected, “it will be time for the Congress to catch up to the executive branch and catch up to reality.”

The Congressman’s remarks, as prepared for delivery, are pasted below.

When Harry Truman Took Executive Action,
“He Used His Pen And We Celebrate His Courage Today”

Like me, Harry Truman was from the Midwest and a plain talker who did not mince words and sometimes made his fellow Democrats uncomfortable.

And like every Republican and Democratic President in modern history – including our current one – Harry Truman was not afraid to use his executive powers to fight for justice in the United States, even when Congress failed to act.

In 1946, we had just defeated Fascism and were already locked in a Cold War with Russia and the communist bloc.

But when the war was over they faced the same segregation, discrimination, Jim Crow and violence as they had before they were deployed – markers of an era from which we continue to feel the lasting effects, to this very day.

In response, Truman established a Committee on Civil Rights and one concrete step the President wanted to take was to desegregate the military. But President Truman knew that legislation mandating desegregation would not pass through the U.S. Congress which was dominated by Southern segregationists – who, it is worth remembering, were mostly Democrats like Truman.

But he pushed forward and Harry Truman signed Executive Order 9981 on July 26, 1948 and the last all-black unit in the United States military was finally abolished years later.

Congress caught up with reality and with the President, but it took many years.

I am fairly confident that Democrats from North Carolina, Arkansas, Georgia and Louisiana asked Harry Truman not to do it, but he did it anyway.

And I would venture to guess that there are not too many Members of Congress today who wish that Truman did not desegregate the military or had waited — however long it took — for Congress to evolve on the segregation issue.

He used his pen and we celebrate his courage today.

But here is one big difference between what Harry Truman did and what President Obama is considering. President Truman never asked Congress for legislation or gave them 2 years to act.

But President Obama, as he contemplates taking executive actions to keep families together and spare certain immigrants from deportation, knows that he did ask Congress to act and he did give us time, repeatedly, to act.

But he did ask this Congress – as far back as January 30th 2013 — to act. He worked with both parties in the Senate to help shepherd an immigration bill through in June 2013.

And for a year and a half, he has waited – patiently deferring the use of executive action as a last resort — and he held off again and again so that he could give the Republicans in the House time to pass a bill.

When Republicans in the Senate said gay people cannot be included under any circumstances, the Democrats didn’t like it. It offended us, but we said let’s keep trying to find compromise.

When Republicans said they needed 30,000 more border guards, the Democrats found a way to include that.

When the House said it would not even consider the Senate bill, we Democrats – myself included – said OK, let’s work out a House bill.

And when Republicans said immigrants could not get a special path to citizenship and that we would have to pass many separate bills piecemeal, Democrats and the President never left the table.

Now the Speaker says that the President is picking a fight with Republicans over immigration and he is vowing to fight back, which is his right.

But I would advise the Speaker that his fight is not with the President or the Democrats, it is with the American people. It is a fight he will have to deport the parents of millions of U.S. citizens, the spouses of U.S. citizens, and the parents of DREAMers who know no other country but this one. That is who the Republican Party intends to fight.

But let’s be clear, nothing the President does will keep the House from working with the Senate to pass immigration reform and his actions can no longer serve as a convenient excuse for the inaction of Congress.

Sitting at his desk in the White House, Harry Truman said the “Buck Stops Here.” And he was right then and he is just as right today about the current occupant of the White House. The President has a responsibility to act even when the Congress refuses to.

And just like the 1950s and 1960s after President Harry Truman desegregated the military, it will be time for the Congress to catch up to the executive branch and catch up to reality.