Latina Lista: News from the Latinx perspective > Columns & Features > Guest Voz > Guest Voz: Secretly negotiated trade agreement could be “TPP”ing point in creating a future none of us should want

Guest Voz: Secretly negotiated trade agreement could be “TPP”ing point in creating a future none of us should want 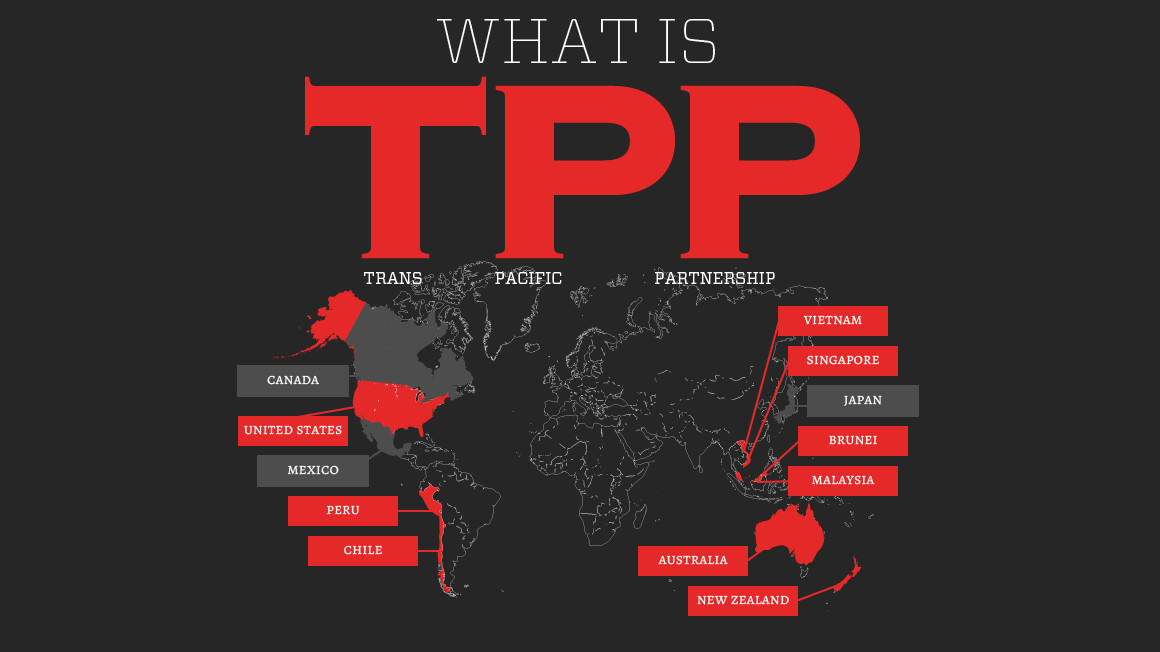 “Today we say, enough is enough! We have been denied the most elemental preparation so they can use us as cannon fodder and pillage the wealth of our country. They don’t care that we have nothing, absolutely nothing, not even a roof over our heads, no land, no work, no health care, no food nor education.”

This First Declaration of the Lacandona Jungle, published in Chiapas, Mexico by the Zapatista (EZLN) anti-neoliberal movement in 1993 sparked the “new” Mexican Revolution of the 20th century, and was in part a response to the signing of NAFTA by the Mexican government.

NAFTA, or the North American Free Trade Agreement was and still is a controversial trade “partnership” between the United States, Canada and Mexico and was quickly followed by the mass exodus of newly further-impoverished Mexican farmers from the primary farming epicenters of their nation: Chiapas, Guerrero, Oaxaca, Puebla — and into the United States.

In short, NAFTA severely eliminated Mexican tariffs on foreign crop prices (among other goods), rendering small-scale and local Mexican farmers unable to compete even within their own hometowns.

Prices paid to Mexican corn farmers fell 66% overnight and after 3 years of NAFTA’s implementation the percent of rural Mexicans who did not have enough money for food rose from 36% to 50%. With American farming products streamlining into the Mexican nation at subsidy and NAFTA-infused prices via the U.S. Congress, we had rendered the Mexican farmer jobless overnight and a migrant worker “without papers” soon after.

Today however, “enough” may not be enough for the Office of the United States Trade Representative; while a 2010 report by the Monterrey Institute of Technology in Mexico estimates that 50 million, or close to 46% of Mexicans live in poverty, we may be striving to out-do ourselves.

Our government’s newest and largest version of NAFTA is a currently proposed trade agreement known as the Trans-Pacific Partnership, or TPP. TPP could potentially encompass up to 21 countries, many of which also struggle with poverty, such as Vietnam, where over half of the population lives on less than $2 a day, and Peru where 35% of the population lives in poverty.

If you don’t know what TPP is, you are not alone; the entire process to negotiate the treaty has kept the global public in the dark, and was only recently leaked in November on WikiLeaks as the “Secret” TPP Agreement.

It might also be worth noting that the secrecy of the U.S. government surrounding TPP is greater than any other trade agreement in the past; even President Bush’s FTAA, discussed below, had published the entire text of the document on a U.S. governmental website.

The secrecy is alarming considering the magnitude of the deal; TPP is the largest trade agreement in existence since the formation of the World Trade Organization in 1995, and encompasses 40% of world trade among 800 million people.

Revelations of the WikiLeaks confidential document among activists characterized TPP as “NAFTA on steroids,” and was labeled by one journalist as “a Christmas wish-list for major corporations…Hollywood, the music industry, big IT companies such as Microsoft and the pharmaceutical sector would all be very happy with this.”

Equally critical of TPP is Doctors Without Borders (MSF), which recently sent President Obama an open letter to express their “serious concern” of the treaty poised to wreck havoc on the health of millions worldwide by enforcing stricter patent protections that would eliminate the generic drugs that are used to save the lives of millions.

Within their letter MSF writes that “80% of the antiretroviral drugs used in developing countries are produced generically in India”. MSF also cites that the cost of the antiretroviral drug treatment needed for HIV/AIDS, as well as tuberculosis, malaria and many other diseases, has been reduced by 99% due to the competition created by generic drug companies and has lowered the per person cost yearly drug cost to under $140 USD for one HIV/AIDS patient.

Our largest international aid organizations, including PEPFAR, UNITAID, and The Global Fund for AIDS, all rely on generic drugs to continue the life-saving work they perform worldwide.

The MSF slogan against TPP asks the U.S. Trade Representative, Stan McCoy to “stop trading away health”, however it’s proposed legislation would move far beyond just the realm of international trade.

Only 5 of the 29 chapters of the TPP document involve trade, whereas the rest of the 24 chapters cover other provisions that Loris Wallach, a journalist covering TPP, summarized by saying “there is almost no part of your life that TPP couldn’t undermine.”

Wallach characterized the other 24 chapters of TPP as “either handcuffing our domestic governments, limiting food safety, environmental standards, financial regulation, energy and climate policy, or establishing new powers for corporations.”

Furthermore, the regulations invoke a “copyright” portion that would allow a part of SOPA, previously struck down in Congress after public outrage, to be incorporated into TPP, thereby prompting some activists to label TPP as “the son of SOPA.”

While a full list of TPP ramifications can be found online at ExposeTheTPP.org, a few of the ways that TPP proposes to undermine global health and human rights also include:

As medical students at Boston University in varying stages in our training, we join health organizations like MSF, labor unions such as AFL-CIO, and countless other advocates in asking President Obama and other global leaders to reject the deal proposed by TPP.

There is a strong precedent for advocacy that has been able to stop behind-closed-doors agreements that support the 1% of our world. The FTAA, or Free Trade Area of the Americas was proposed again by President Bush in 2003 as a mega-expansion of NAFTA among 34 countries in the Americas yet failed to pass the last negotiation stages; Latin America’s Bolivarian Alliance, or anti-neoliberal political climate and public backlash was able to defeat the “partnership”.

Then-president of Venezula, Hugo Chavez, had called the FTAA a “tool of imperialism” during the height of negotiations and the legislation received public dissent similar to that rising against TPP. Other restrictionary legal acts such as SOPA, the Stop Online Piracy Act that poised to eliminate internet sharing freedoms by strengthening copyright laws, was also defeated with public outcry, including a Wikipedia 24-hour blackout in 2012.

Past advocacy shows that it is possible to stop these devastating laws that threaten the health and livelihoods of millions, but only through a concerted public outcry.

We ask you to step forward and help join us in spreading the word about TPP and its potentially devastating effects. Upon signing of the NAFTA treaty in 1993, the Zapatistas acknowledged that this was a message from the global neoliberal community that “they don’t care that we have nothing”.

Use any medium and action you can to show that we are different, that we stand in solidarity with health and human rights globally, and that we deeply care.

The Occupy movement has written that, “if people knew the contents [of TPP], it could not pass.”

Let us make sure everyone knows; we couldn’t stop NAFTA over two decades ago, but that doesn’t mean we will let an even larger agreement pass today.

More than 70 young people killed each day by violence in Brazil
Comment
Video: Climate Action superhero teaches all ages how one simple act can conserve tons of water