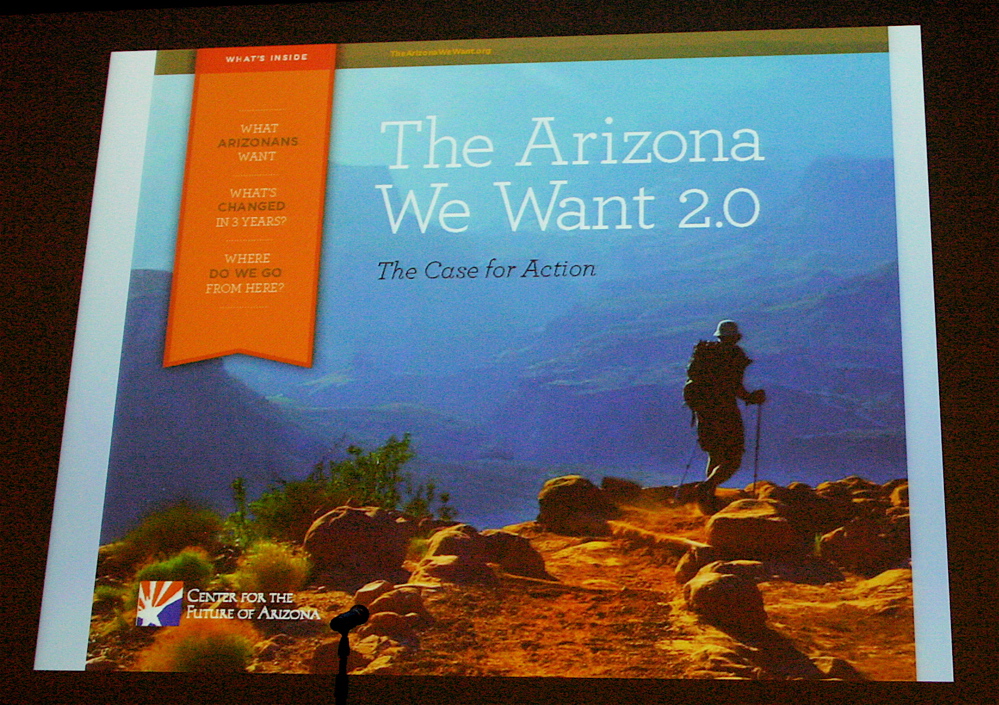 A vibrant Arizona of the future will require a strong investment in the state’s educational system. But party politics and a focus on balancing budgets over creating educational opportunities could hurt the state’s effort to build and keep a well-trained workforce.

Those were some of the discussion points examined during “The Arizona We Want 2.0: The Case for Action” program May 29 at the High Country Conference Center in Flagstaff.

Presented by Flagstaff Forty, a business leadership group, the program featured Dr. Lattie Coor, chairman and CEO of the Phoenix-based Center for the Future of Arizona.

Following the presentation, Coor, a 1958 graduate of NAU, talked with AmigosNAZ about the significant role Latinos will play in the state’s future and the need for the Latino community to cultivate leaders to participate in community boards and elective positions.

Following his presentation, Dr. Lattie Coor, chairman and CEO of the Phoenix-based Center for the Future of Arizona, spoke with AmigosNAZ about the role of the Latino community in the state’s economic and social development.

Coor said he wasn’t surprised by the report’s findings that the number of Latino youth already surpasses other ethnicities in the state. In the report, Hispanics surpass the age distribution of Arizona residents by ethnicity in every category up through the age of 39.

At 30.1 percent, Latinos now represent nearly one-third of Arizona’s total population and they make up 43 percent of the state’s K-12 students.

“Even before serving on the State Board of Education, and as president of Arizona State University, it was clear to me that unless we invest in the education of our Hispanic students, we as a state will never get to where we need to be,” Coor said.

For that reason, the center created the “Beat the Odds Institute,” which began as the center’s three-year research study on “What does it take to get great educational achievement in a school with mostly Latino school enrollment?”

Five years after the study, principals from 141 school partners throughout Arizona have participated in the program, according to a story by Hispanic-Today. A total of 83 percent of “Beat the Odds” partner schools earned “better than performing” ratings compared to 79 percent for similar schools not in the program.

“A well-educated workforce is essential to Arizona’s future and economic well-being,” Coor was quoted in the Hispanic-Today story. “While progress has been made in improving academic achievement in our partner schools, ‘Beat the Odds’ should strive to reach every low-income, minority-intensive school in Arizona.”

“The Arizona We Want 2.0” report also found while Latinos currently make up 10 percent of the U.S. electorate, they make up 20 percent of Arizona’s electorate, surpassed only by New Mexico (39.7 percent), California (27.3 percent) and Texas (26.6 percent)…