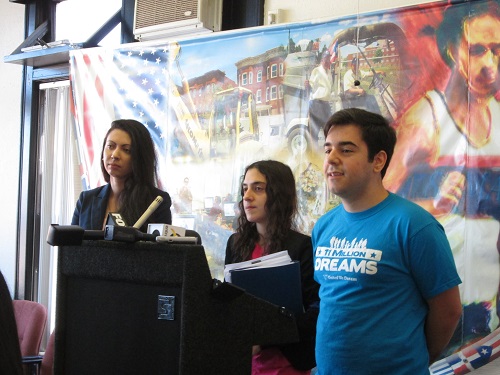 About 75 energized members of Connecticut Students for a Dream rallied last week at the Center for Latino Progress in Hartford after representatives of the group, also known as C4D, filed a rule-making petition formally requesting that the state Office of Higher Education, Board of Regents and Board of Trustees open up institutional financial aid to undocumented students in the state’s public colleges and universities.

For Junior Sierra, a high school junior from Norwalk, who came to the US at age 6, like many others who spoke at the event, this change they say will remove a major roadblock they’ve faced in their efforts to get an affordable college education.

Sierra, said, “I, like thousands of other students, am being denied equal opportunity to a college education. We want to end the barriers that prevent high-achieving students from achieving their potential.”

In a citywide science fair, Sierra completed a project that was deemed “Best in the Fair,” and later made strong showings in other academic competitions, earning a $20,000 scholarship from Quinnipiac University that he won’t be able to collect without the rule change that C4D is seeking.

“This is really my only opportunity to go to college, so I’m really pursuing it,” Sierra said.

Board of Regents regulations currently require that 15 percent of tuition revenue (payments by all students) be used as need-based aid to students. Undocumented students contribute to this pool of funds used for institutional aid, but they cannot receive the aid provided, which is unfair and bad for the state, C4D argues.

The petition formally requests that the state…

Video: Legal scholar and author Ian Haney López explains how politicians use racism as political strategy to win votes
Comment
Guest Voz: No More Time to Delay: It’s Time for Latinos to Sign Up for the Affordable Care Act