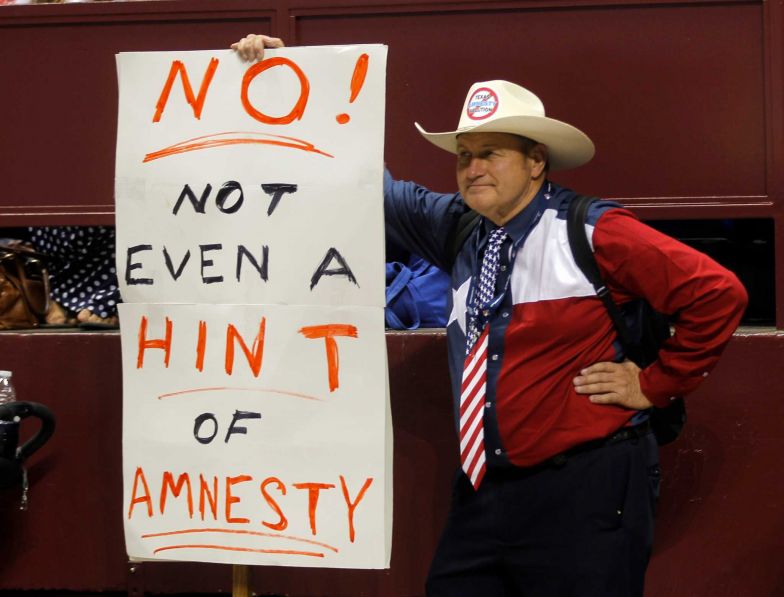 In new signs that prospects for immigration reform legislation are all but dead for now, developments in both state and national arenas have pushed a solution to the issue farther down the political tracks.
For starters, Texas Republicans readopted a tough stance at the party’s convention in Fort Worth last weekend. Drawing more than 7,000 delegates, the Lone Star GOP convention voted to remove a 2012 position statement known as the “Texas Solution” which backed a guest worker system for undocumented persons.

The party delegates came out against a guest worker program but held out the possibility of granting visas to workers in industries facing labor shortages, as long as “really secure borders” and a universal E-Verify employee eligibility system were in place. The new state party platform includes opposition to in-state college tuition for undocumented students, and supports prohibiting municipalities from taking measures against enforcing federal immigration law.

Additionally, the Republican activists voted against a proposal that would have supported temporary visas, an idea which has been floated within the Republican Party as an alternative to a path to citizenship for undocumented residents of the United States.

Arturo Martinez de Vara, Republican supporter of the so-called “Texas Solution,” blamed procedural confusion for his party’s return to a harder-line immigration stance.
Houston restaurant owner Brad Bailey, who was involved in promoting the “Texas Solution”, sounded a similar note about the anti-reform forces’ triumph. “I’ll give them credit, they outworked us,” Bailey said.

Tea Party activists were credited for pushing the Texas GOP further to the right on the long unresolved immigration debate.

“There is language that allows us to slide toward amnesty,” San Antonio delegate Jack M. Finger, said about a soon-to-be defeated immigration platform proposal. “Guest worker, visa permit, all that puts us on a road to make our citizenship meaningless.”

Of 200 platform proposals submitted to state Republican leaders in Fort Worth last Friday, 150 of them had to do with immigration…