While President Obama has repeatedly pledged to make immigration reform a centerpiece of his next term, not one question was asked of him on this topic by reporters during yesterday’s White House press conference.

Though the debt ceiling was the issue of the day, it is fair to assume immigration will take center stage in future White House press briefings. 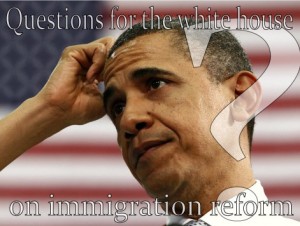 To clarify and define what can be expected of President Obama’s reform proposal, and to further advance the national debate about immigration reform, tough questions should be asked that cut through political spin and rhetoric.

Below are just a few specific questions that we at the National Day Laborer Organizing Network feel should be asked of the White House.

1. It is widely reported that the Obama administration has deported unprecedented numbers of immigrants, and it is widely suspected that the Department of Homeland Security is operating under a self-imposed a deportation quota.

Is there a deportation quota? If so, where does it come from, and will it be reduced or eliminated as part of the President’s proposal on immigration reform?

2. Immigration has been on the national agenda for over twelve years, and previous proposals have repeatedly stalled in Congress while nativists have made progress passing unconstitutional, regressive legislation at the local level. Many, including Senator Marco Rubio, have argued that both political parties have simply been content to seize political advantage from the intractable status quo.

What will make this effort for comprehensive immigration reform different? What is the path through the House of Representatives? And what is the Administration’s “plan B” if legislation does not move forward (other than to simply blame Republicans for lack of progress)?

3. During the Supreme Court argument about Arizona’s SB 1070, Arizona’s counsel said this: “The Federal Government doesn’t like this statute [Sec 2b of Sb1070], but they are very proud of their Secure Communities program. And their Secure Communities program also makes clear that everybody’s that’s booked at participating facilities is — eventually has their immigration status checked.” He said Arizona, “borrowed the federal standard as its own.”

What is the difference between the Obama Administration’s Secure Communities program and the infamous racial profiling provision Section 2b of Arizona SB 1070?

4. In the first four years of the Obama Presidency, the Secure Communities deportation grew from an obscure 1% of the country to forcibly being activated in 97% of the US by the end of 2012. In that time, a mountain of evidence has surfaced showing that the program was misrepresented. It cast an indiscriminate dragnet and was implemented in ways that erode public trust in law enforcement. Over the last four years, a series of reforms have been announced to mitigate its damage.

Can we expect further reforms of the Secure Communities program? If so, when?

5. During the last four years, several employees of Immigration and Customs Enforcement (ICE) openly defied the President’s policy of prioritized enforcement. Moreover, the agency’s implementation of administrative reforms has been scattered at best.

Is ICE a rogue agency? What consequences does the White House have in place for ICE agents who lie to the American public or do not follow your administration’s priorities (like those who raided the home of dreamer Erika Andiola in Arizona)?

6. A consequence of the 1986 immigration overhaul was the imposition of so-called “employer sanctions.” The worksite verification requirements has been used as a tool by predatory employers to exploit immigrants, to deter worker organizing, and to put access to basic labor protections out of reach.

How will the Obama Administration’s comprehensive immigration reform proposal strengthen- rather than undermine- workplace protections for all workers? How will it prevent employee-verification systems from being used by employers to counter workers’ union organizing efforts?

7. To most people, it is clear Sheriff Arpaio in Arizona is using immigration as pretext to violate bedrock civil rights. In other places like Alamance County, Cobb County, and Gwinnet County, similar patterns of rights violations have occurred. To many observers, it looks like the Department of Justice is forced to put out fires started by the Department of Homeland Security.

Are the DOJ and DHS working at cross purposes? Under immigration reform, will the administration continue to enlist law enforcers under investigation, such as Sheriff Arpaio in Maricopa County, as force multipliers in immigration enforcement? What will be done to strengthen the Civil Rights Division within the Department of Homeland Security?

B. Loewe is the communications director for the National Day Laborer Organizing Network. Follow on twitter at @ndlon