Mexican poet and activist, Javier Sicilia, plans to bring his peace caravan to the United States

LatinaLista — Anyone who has had an eye on Mexico’s escalating cartel violence knows about Javier Sicilia. Sicilia is one of Mexico’s leading authors and poets and someone for whom the violence seizing his homeland has became intensely personal. Last March, Sicilia’s son was brutally murdered by drug traffickers. 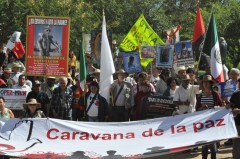 Wracked with a parent’s grief, Sicilia responded to his personal tragedy by uniting with others who had also lost family members to cartel violence. He formed an organization called Movimiento por la Paz con Justicia y Dignidad (Movement for Peace with Justice and Dignity) and spearheaded a country-wide protest caravan that went from Cuernavaca to Juarez.

Along the way, some of the parents-turned-activists, who joined Sicilia in the fight for justice, lost their lives to the very violence that took their sons and daughters.

Yet, he won’t be intimidated or give up.

Sicilia’s efforts have not gone unnoticed. In December, Sicilia was profiled in Time magazine’s issue of “Person of the Year” — and he’s inspiring more of his paisanos to join the pursuit of justice.

Most recently, more than 280 Mexican artists and professionals in culture and the arts launched a radio and television campaign called Ponte en los zapatos del otro (Put yourself in someone else’s shoes). The campaign spots are based on the true testimony of victims of violence and their families. Each one ends with the line: “I do this so that what happened to me doesn’t happen to you.”

But Sicilia’s work doesn’t stop there, nor his protest caravans.

In April, Sicilia’s organization plans a one-year commemoration of its founding, since it will also be the anniversary of his son’s death. The hope is that the commemoration will be a national conference where participants reflect and talk about how to create peace in the country. The group is also looking to set up a national meeting with victims of violence in the Zapatista-controlled territory in the southern part of Mexico and hold talks with the indigenous of the region.

Once the Mexican elections are over, Sicilia plans to travel even farther — he wants to bring his peace caravan to the United States.

Tentatively planning for mid-July to mid-August 2012, Sicilia and his group are working on the details of the route. Though they’re not sure in which city they will launch the caravan, they do know they want to travel along the US-Mexico border to underscore the tragedies that thousands of families have suffered on both sides because of illegal arms trafficking. The caravan’s organizers told a Mexican publication that the caravan could possibly end up either in Washington DC or at the Republican and Democratic National Conventions.