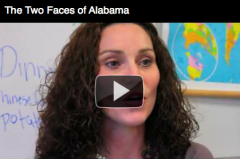 On June 9, 2011, Alabama enacted H.B. 56—the most extreme state-level anti-immigrant bill passed to date. It has been nine months since the law’s passage and its path of destruction is still palpable from children too afraid to come to school to potential economic losses of up to $10.8 billion. People from all walks of life have spoken out against H.B. 56 — and now the nation hears from Hollywood. Director Chris Weitz has turned the camera on Alabama and created a series of videos asking “Is This Alabama?”

Previous Post Marco Rubio still struggling on being a Latino in Congress
Next PostEditorial: Once again: I-L-L-E-G-A-L!

Marco Rubio still struggling on being a Latino in Congress
Comment
Editorial: Once again: I-L-L-E-G-A-L!