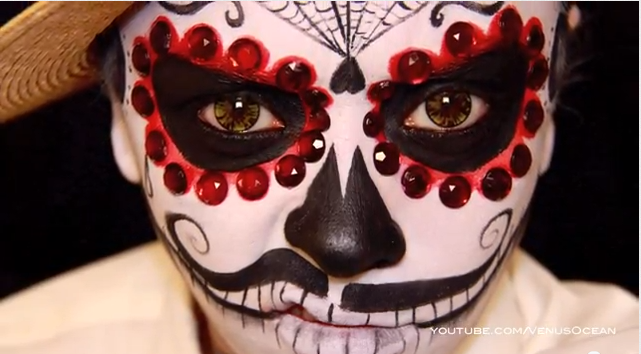 LatinaLista — El Día de los Muertos or Day of the Dead has been a longstanding Mexican and Latin American tradition dating back thousands of years to the Aztec festival in honor of the goddess Mictecacihuatl. It’s a celebration honoring our deceased loved ones.

The observance happens on November 1 and 2 with families building altars to honor their loved ones or going to the graves of the loved ones, decorating them and spending the day there.The observance has created a cottage industry of its own with special foods such as sugar skulls and sweets made in the image of skeletons.

The observance has also spawned elaborate face painting among those who want to carry the observation to another level of celebration. YouTube features many videos uploaded by creative and talented artists showing how to create that perfect Día de los Muertos face, but there’s only one problem.

The vast majority of the tutorial videos are geared to female skeleton faces. While some of the faces can be seen as unisex, there aren’t many dedicated to depicting a male skeleton. In this tutorial, accompanied by a ‘haunting’ soundtrack, viewers can learn how to paint that perfect male skeleton face, from which can be seen can still be worn by women.