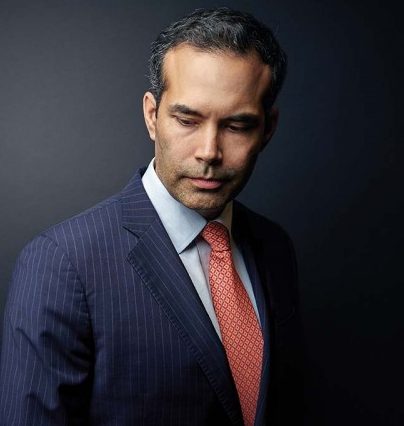 As a kid, I remember dreading every time the teacher chose to read to the class the Hans Christian Andersen fairytale The Emperor’s New Clothes. The idea that a king could trot around in invisible robes and everyone was too afraid to admit that he was really naked struck me as so absurd as to be a waste of a perfectly good story time.

My young mind couldn’t fathom why people would pretend to see something that wasn’t there. Little did I know how that fairytale would come back to haunt me as an adult.

The comparisons between that classic fairytale and Donald Trump’s presidential bid are numerous and predictable — right down to the king’s entourage who encouraged the royal subjects to believe in a lie.

Aside from Trump’s obligatory group of supporters — his children, wives (and exes), advisors and campaign team — Trump’s entourage has expanded to include every high-profile GOP who encourages blind support of “The Donald.”

One of the latest is George P. Bush — eldest son of Jeb Bush, and for many Latinos, hope for the future of Latino politics.

In an appearance at a closed-door gathering of Texas GOP leaders in Austin last week, the younger Bush, who is also the Texas Land Commissioner, resurrected his teacher’s training and scolded the room for not getting behind their party’s candidate.

Forget that Trump consistently insulted George P.’s father Jeb during the infamous GOP debates and took a verbal jab at his mother’s Mexican heritage. To his credit, the younger Bush didn’t tell the audience to get behind Trump because the billionaire is qualified or would make a great president. No, the only reason for George P.’s scolding — and let-bygones-be-bygones attitude — was for the simple reason that the GOP must not lose to the Democrats.

In a normal election that would be considered standard marching orders. But this time around, it’s not enough of a reason, though some in the GOP would like to convince us otherwise.

George P. and several of his peers are pushing Latinos to vote for Trump. Alfonso Aguilar and members of the Latino Partnership, Helen Aguirre Ferré, RNC Hispanic Outreach Director; and FL Sen. Marco Rubio, to name a few, have all either endorsed Trump publicly or encouraged Hispanic voters to cast their votes for the GOP candidate because, as they parrot Trump’s message, he “will make this country great again.”

It is disappointingly disgraceful that these Latino GOP members have so little strength of character that they would insult the intelligence of Latino voters and purposely mislead us, just to tow the GOP party line, without regard to the true consequences of a Trump win to the Latino community.

Thankfully, not every GOP member is that desperate that they would abandon their own morals.

A slew of white and Latino GOP members, from high-profile to rank-and-file, have either wavered in their support or defected from the party in recent weeks recognizing the danger a Trump presidency would bring to the nation’s economy, race relations, national security and global relationships.

Some of these GOP defectors will vote for Clinton and some will go third party for the first time in their lives, but the important thing is that they will vote for somebody whom they see to be much more knowledgeable about world affairs and domestic issues and evenly tempered when reacting to criticisms and crisis situations.

George P., and the other Latino GOPers, who shamefully promote Trump to the Latino community under the false assumption that it’s politics as usual, highlight a common character flaw that we especially hope elected officials can overcome — putting self-interests above the good of the people. In this case, the good of the nation.

It’s bad enough that the GOP is obligated to parade Trump as their winning candidate but for members of our own community to misrepresent him to la gente as being something more than he is, it’s politically unforgivable with no happy ending for anyone.