Latina Lista: News from the Latinx perspective > Economy > A future where 2.5 million Latinos won’t be able to own their own homes

A future where 2.5 million Latinos won’t be able to own their own homes 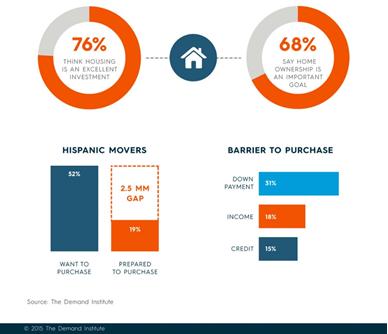 LatinaLista — The ultimate symbol of the American Dream is owning a home. For many, it signifies planting roots in a community and having a stable foundation (no pun intended), both financially and socially. Yet, for Latinos, for whom 50 percent owned their own homes in 2007, home ownership is slipping away.

According to the recently released study, “Hispanics & Home Ownership: Closing the Gap,” by the Demand Institute, only 44 percent of Latinos own their own homes today and the numbers are dropping.

What makes this statistic especially troubling to researchers is that “Hispanics will account for nearly four out of every 10 new households formed between now and 2020 – more than any other racial or ethnic group.”

When the recession of 2008 hit, it sidelined many Latinos from home ownership. A continuation of stagnant incomes, not enough savings, “tight lending practices” and rising costs of housing combine to keep Latinos from owning the roofs over their heads.

And for those Latinos who can scrape up enough money to buy their own homes, they’re heading to the suburbs. Suburban living may not be the first choice for location but families find that their tight dollars stretch farther in the suburbs with more square footage for the price, better equipped and staffed schools and a stronger sense of community than can be found in many urban areas.

The report lays out a dismal prediction that though Latinos do want to buy a home when it comes time to move from their current rental properties, 2.5 million won’t be able to in the foreseeable five-year future. The reasons remain the same: bad or lack of credit, no savings or not enough income to afford it.

“Hispanics are one of the fastest-growing demographics, and their prospects for home ownership in a lot of ways reflect the prospects for the entire country,” said Louise Keely, president of The Demand Institute.