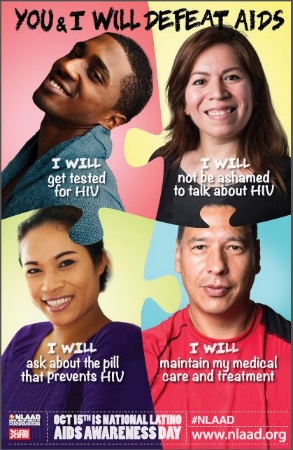 The AIDS epidemic among Latinos has evolved to the point that today most new diagnoses occur among Latino gay and bisexual men (81%). The disturbing fact, as revealed by studies by the Centers for Disease Control & Prevention (CDC), is that:

An estimated 43% of Hispanics or Latinos who received an HIV diagnosis were not born in the United States or Puerto Rico (a U.S. territory), and among these Hispanic or Latino immigrants, 66% were men who have sex with men.

As a result, there are more than 220,000 Latinos living with HIV/Aids. The CDC finds that Latinos account for 22 percent of new HIV infections and contract HIV, at more than three times the rate of non-Latino whites, making HIV/AIDS the seventh-largest killer of Latinos among those aged 25 to 34 in the United States.

Cultural stigma continues to play a huge part in keeping Latinos and Latinas from receiving available testing and not talking about it with friends, family members or even healthcare workers, which just makes a bad situation potentially worse.

To combat the silence that surrounds the topic, this year NLAAD has two ongoing themes: YOU & I Will Defeat AIDS, along with the CDC's campaign, We Can Stop HIV One Conversation at a Time.

Both campaigns strive to underscore that AIDS/HIV is a community issue that need not be suffered in lonely silence anymore. It's an issue that as a community we should be encouraging:

While there may not be a cure, there is treatment for AIDS/HIV that can ensure a much better quality of life and outcome for a diagnosis that used to be seen as an inevitable death sentence.