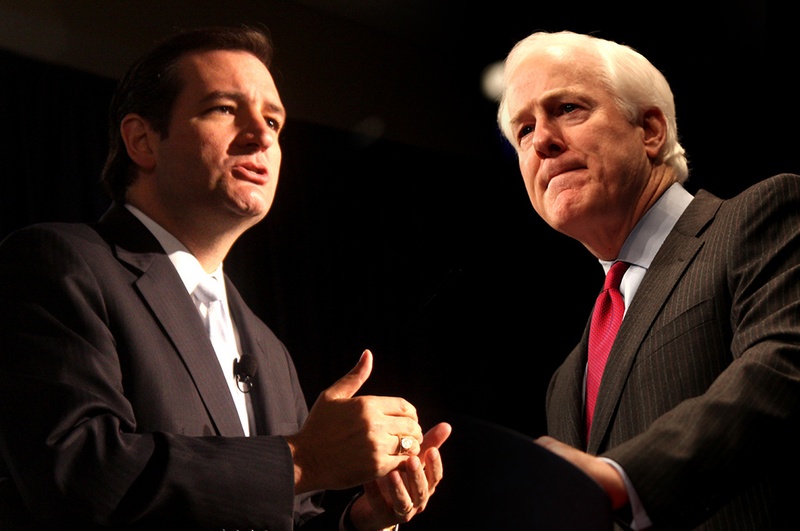 LatinaLista — Two senators that have been major thorns in the sides of the Gang of Eight during these senate debates over immigration reform have been two men that hail from the same state — Texas.

Sen. John Cornyn and Sen. Ted Cruz have both been uncompromising in their attitudes and not shy about their disdain for a bill, when passed, will not only jeopardize each man’s political future but could make the GOP the minority party in the state.

That might explain Cruz’s purposeful disconnect with his fellow Latinos in the Lone Star State and Cornyn’s disingenuous attempts to mask his so-called support of the bill with what has been called out by observers as a ‘poison pill’ amendment.

In a rational world, the actions of these two senators would seem irrational. After all, Texas is a border state with the second highest undocumented population in the country. As of now, 38 percent of Texas’ population is Latino vs. 45 percent Anglo – that’s only a 7 percent difference. A gap that won’t take too long to bridge.

Texas is already classified as “majority-minority” with 55.5 percent of the state’s population comprised of people of color. In the latest U.S. Census analysis, three of the six counties that became majority-minority in 2012 were in Texas.

Not to mention that whites in the under-5 age group are expected to tip to a minority this year or next, according to the U.S. Census.

So why are Cornyn and Cruz refusing to accept, but more importantly, represent the majority of their constituents when it comes to immigration reform and other issues that have been documented as being very important to minority voters, like Obamacare?

The perception is that both men are only interested in representing a very narrow niche/ideology of select Texas voters. Voters with money who can command the kind of attention that 55.5 percent of the state’s population can’t. A niche that may not be around in its present ‘state’ come the next election.

Cornyn is due for re-election in 2014 and Cruz has his sights set on even higher office. Yet, whether these men believe it or not, their continued attacks and disingenuous tactics to prevent immigration reform from becoming a reality will not only be remembered by this generation and the new generation of Texas Latino voters, but may very well be the impetus needed to finally turn Texas Blue — and turn Cruz and Cornyn red with embarrassment for contributing to their party’s demise in Texas.

immigration reform, John Cornyn, majority-minority, Ted Cruz, Texas
Previous Post Video: Getting the story out to all about the heroics and bravery of the only Latino-segregated Active-Duty military unit in US history
Next PostIntrn'l Video: Barcelona — A city steeped in history forging a modern identity

Video: Getting the story out to all about the heroics and bravery of the only Latino-segregated Active-Duty military unit in US history
1 Comment
Intrn'l Video: Barcelona — A city steeped in history forging a modern identity