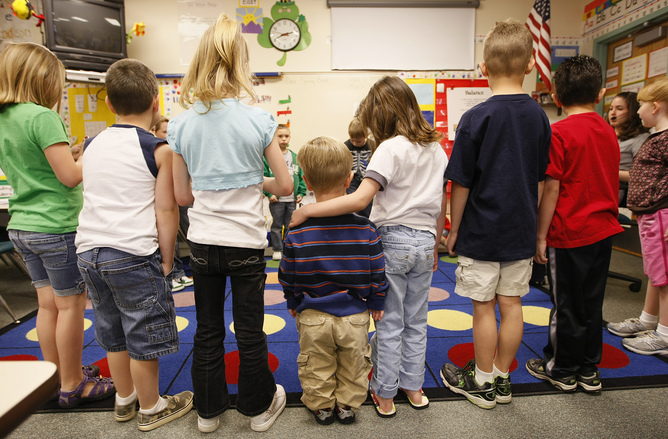 By William Schmidt and Nathan A Burroughs
The Conversation

The influence of student poverty on student learning is indisputable. International studies demonstrate that in every country, children from disadvantaged backgrounds are much less likely to excel in school than their more fortunate peers.

The easy explanation has been that for a variety of reasons, poverty makes it more difficult for less fortunate children to learn. It might seem obvious to explain the inequality in the learning between more and less affluent students by the direct effect of unequal family background.

But is this the whole story?

New evidence from our research, published recently in Education Researcher, one of the nation’s top peer-reviewed education journals, suggests that a substantial portion of the unequal education outcomes that we see between richer and poorer students is related not to the home, but to what happens in the schools.

Opportunity to learn is important

Along with our coauthors, Organisation for Economic Development (OECD) analyst Pablo Zoido  and Richard Houang, a researcher at Michigan State University, we conducted an extensive study based on the 2012 PISA, an international test for assessing 15-year-old students' math and reading literacy.

The key to our research is the concept of “opportunity to learn,” the commonsense idea that students’ ability to learn complex topics like mathematics is dependent on their being exposed to those topics in the classroom.

The 2012 PISA for the first time included survey items asking students whether they’d been exposed to mathematics problems – not whether they could solve those problems, but simply whether they remembered having ever been taught about that kind of math.

Students were asked to rate their familiarity with nine topics in algebra and geometry topics on a 0 to 4 scale. We combined student answers to these questions into an index measuring how much math students were exposed to. Comparing this – what we called “Opportunity to Learn index” – to PISA mathematics literacy scores, we determined that opportunity to learn mathematics topics has a very strong relationship to student learning across countries (including the US).

The question then was what factors determine students' opportunity to learn. The research team went further and uncovered a strong relationship between opportunity to learn and student socioeconomic status. We found that in every country students from disadvantaged backgrounds were exposed to weaker mathematical content than wealthier students.

Instead of compensating for social inequality, the world’s educational systems appear to be making it worse.

Inequality is within schools

Of course, this is the exact opposite of what we expect schools to do. One of the main ideas for public education is to guarantee that every child, no matter who their parents are, will have a chance to make something of themselves based on their own talent and efforts. This “level playing field” principle of education is a strongly held belief in the United States, closely linked to our notion of ourselves as a meritocracy where everyone has a fair chance to succeed.

Our work suggests that, at least when it comes to education, this myth is more like a fantasy.

In addition, our research article casts doubt on the strong emphasis of US policymakers on the problem of “failing schools.” Much of recent activity to close achievement gaps and improve educational performance is based on the premise that by improving outcomes at the worst-performing schools (which tend to have a concentrated population of low-income students), we can improve both equity and average performance.

However, according to findings drawn from the PISA data, much of the inequality in student learning and student opportunities to learn is found within schools. Even though students were in the same grade in a particular school, poorer students reported having been exposed to much less mathematics content.

These findings support earlier research on US schools showing inequalities across classrooms in exposure to math content. One study found that US students from advantaged backgrounds were significantly more likely to take classes teaching advanced math.

For example, two ninth grade students might go to the same school, but the student from the wealthier background might be learning algebra while the poorer student would still be taught arithmetic (which should be taught at lower grade levels).

How do we fix this?

Our work suggests that the practice of tracking – of systematically routing disadvantaged students into classes with weaker instruction – may be very much alive.

The very unequal OTL of rich and poor students suggests that students in the same grade in the same school receive a very different education based on the socioeconomic status of their parents.

Focusing exclusively on “failing schools” alone will not solve the problem.

This research does provide some reason for hope. On average, across countries roughly a third of inequality of student outcomes between students of richer and poorer backgrounds is related to differences in opportunity to learn (in the US it is closer to 40% but in some countries it is much less).

By studying how other countries do a better job of making sure that lower-income students are exposed to strong math content, we might be able to identify ways to dramatically reduce educational inequality.