A Latina Still Standing survivor who beat the odds!

For six months, while going through chemotherapy and radiation treatments, she woke up every day, rallied up the strength to go to work as the “Mid-Day Diva” disc jockey on Mega 104.3 local radio station. What some of her loyal listeners didn’t know was that she was undergoing cancer treatments, while she continued to keep them singing and dancing all day to the old-school tunes of the likes of Earth, Wind & Fire, Michael Jackson and Carlos Santana. 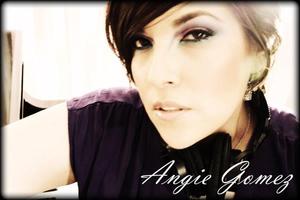 One day a week, Angie Gomez would undergo a five-hour chemotherapy session and then every day for a month she had to attend radiation sessions. She did all of this while still being on the air and performing 4 to 5 nights per week with a local band.

This is what Angie Gomez’ life was like after being diagnosed with stage 2 Hodgkin’s Lymphoma three days before Christmas in December of 2009. All of a sudden she was under attack and found herself in the middle of her greatest battle of her life. She had to fight against one of the deadliest of diseases — cancer.

As if that wasn’t enough to deal with, her and her boyfriend of four years ended their relationship, in the midst of her first round of chemotherapy treatments. She was tired. She was hurt. She was scared. But at least she had her mother to lean on, her rock, she said.

Her strong Latina mother helped her through and went to every chemotherapy and radiation session with Angie. She said her mom had always taught her to be a fighter and a strong woman. She said she had to believe that God would never give her more than she could handle and she held on to the fact that with her mother’s strength and God on her side, they would help her get through it.

I saw this Latina Still Standing fight this monster with grace and dignity and with a strong resolve.

The following year, Angie lost her grandmother, whom she had a close bond with and most recently her mother, her rock, her strength passed away unexpectedly this past March.

Angie beat cancer. She didn’t let it beat her down and she has now been in remission for two years. She also has survived several losses and hardships, yet she continues to be a Latina who is still standing and still moving forward.

Angie believes that attitude is everything. After fighting this battle, she has a different outlook on life and she says she appreciates life even more now. She continues to pursue her life-long dream of entertaining and inspiring people in the Latino communities in both the Valley of the Sun and in her hometown of Superior, Arizona.

She’s also now working on writing and recording her own music and also on a personal line of jewelry, both to be released in the near future. If you ever feel like giving up and you would like some inspiration, you can catch her live on the air on Mega 104.3 FM radio, Monday through Friday from 9 a.m. to 2 p.m. and see her perform live at various venues in the Valley each week with the local Latino and R&B band Power Drive. Or you can catch her on her facebook page at Angie Gomez Mega 104.3 or on twitter at @AngieGomez1043.

In her quest to further inspire and motivate other women, Angie will be holding her first annual Free Women’s Expo conference on Sept. 8th at Wild Horse Pass Hotel and Casino. The conference will include several motivational speakers, Zumba demonstrations, several vendors and a fashion show. She’s hoping to continue to motivate and empower other women to keep standing!

Submit your stories to latinastillstanding@yahoo.com

cancer, featured, Latina
Previous Post Latina artist strives to inspire with her art
Next PostVideo: Author Erasmo Guerra relives his past to create a haunting memoir

Latina artist strives to inspire with her art
Comment
Video: Author Erasmo Guerra relives his past to create a haunting memoir