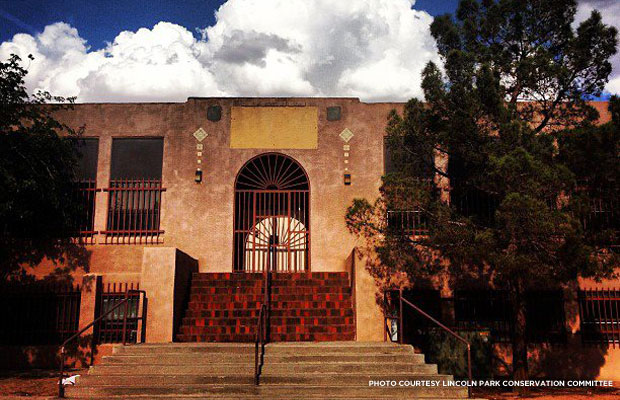 In a predominantly Mexican-American neighborhood, the Lincoln Center has been a gathering place for people in this El Paso community since the early 20th century. It has served as a school, church, and cultural arts center, yet has been threatened with demolition since its closing in 2006 (though the community didn’t learn it was threatened until 2011).

Owned by the Texas Department of Transportation (TxDOT), the fate of the Lincoln Center has been uncertain for the past few years. Demolition was planned in order to create a connecting path between Interstate 10 and Cesar Chavez Highway, but the opinions of the public are making an impact strong enough to delay the project.

The walls of the Lincoln Center hold an incredible amount of history for the people of Chicano ancestry in the El Paso area, and the community has demonstrated how much they value the center through their preservation efforts. Created and organized by the Lincoln Park Conservation Committee (LPCC), the Save Lincoln Center Campaign is leaning on strong community involvement as a form of advocacy.

In addition to the support of community members, the LPCC is partnered with the Senecu Fine Arts Society and the Fire Power 40 Program, has strong support from Senator Jose Rodriguez, and is in the process of working with El Paso Community College. Together, their advocacy efforts have halted demolition of the Lincoln Center and continue to raise awareness of the historical significance of the building.

Community members have attended City Council and Metropolitan Planning Organization Meetings to voice their concerns and stay updated with the progress of the campaign, and they also rally outside of the center when impending decisions are being made or when the building is threatened to show their support.

“We start the rallies with music to kick off the event, and invite speakers like Senator Rodriguez to motivate the crowd and thank them for their support,” said Miguel Juárez, member of the LPCC and advocate for Lincoln Center. “This place has served as a community center since 1912. There’s a lot of history and a lot of people who care about it.”

“We didn’t even know [in advance] it was happening,” Juárez said. “We had to be notified through social media.”

An emergency City Council Meeting was held that same day to seek a temporary restraining order to delay demolition. Nearly 100 people attended within two hours’ notice to offer their support. The public outcry from this community for the preservation of Lincoln Center was certainly heard, as the fence has been taken down.

“It’s a very textured project. There are a lot of issues, issues that are very technical,” said Juárez. “But it’s also very community-driven and community-focused.”

The LPCC hosts an Annual Lincoln Park Day in September to raise awareness and celebrate the art and culture that has stemmed from the Lincoln Center, such as the large-scale murals on the pillars of the I-10 and US 54 freeway interchange.

The mural project began in 1983, but wasn’t fully carried out until Chicano artist Carlos Callejo proposed working with several other artists and students in the area to help complete the murals in 1999.

The murals have various themes, but many depict images of Chicano heritage and relate to the history of the culture. There are also large murals inside of the Lincoln Center, and if the building is saved, advocates hope for it to be turned into a Latino Cultural Arts Center.

Cassie Keener is an Editorial Intern at the National Trust. She enjoys writing, spending time outdoors, and is a movie and music enthusiast.