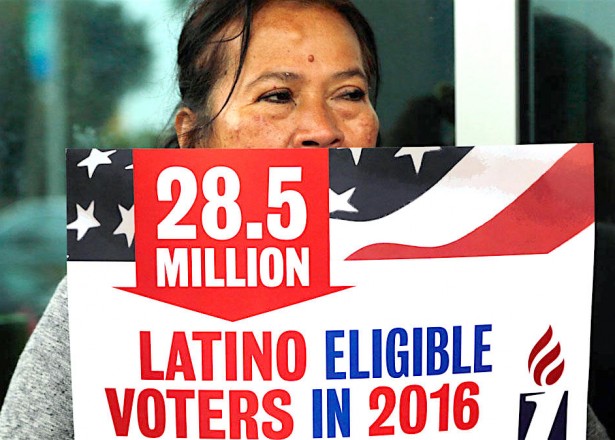 The U.S. electorate this year will be the most racially and ethnically diverse in U.S. history. Nearly one-in-three eligible voters on Election Day 2016 will be Hispanic, Black, Asian or another racial or ethnic minority, up from 29 percent in 2012.

Much of this change is due to strong growth among eligible, Hispanic voters, in particular U.S.-born youth. An important emerging voting bloc is Latinas, which played a decisive role in the 2008 and 2012 presidential elections and are poised do the same in the upcoming general election.

Latinas will have many reasons to turn out to vote in November, but the Trump campaign and this candidate’s rhetoric might increase turnout among Latinas over what we have seen in previous elections.

First, Trump’s rhetoric against “illegal immigration” has been incendiary. For example, he said, “When Mexico sends its people, they’re not sending their best…They’re sending people that have lots of problems, and they’re bringing those problems with us. They’re bringing drugs. They’re bringing crime. They’re rapists. And some, I assume, are good people.”

Second, Latinas might be mobilized by Trump’s comments around gender. For example, just recently he said, “Frankly, if Hillary Clinton were a man, I don’t think she’d get 5 percent of the vote. The only thing she’s got going is the women’s card,” Trump said in the aftermath of his five-state primary sweep on Tuesday. “And the beautiful thing is, women don’t like her.”

In a follow-up question with respondents, who said they were more enthusiastic about the 2016 election, we asked, “What is different about 2016 that makes you more enthusiastic to vote this time?” A plurality of respondents (41%), essentially noted that it was to stop Trump.

Further, 70 percent of women have an unfavorable view of Trump, according to an April 2016 Gallup poll, and Clinton is significantly ahead of Trump in the polls in a head-to-head matchup. The lack of support by Latinos for a Trump presidency is evident in poll numbers and at the ballot box, despite his claim that “The Latinos love Trump, and I love them.”

In addition to mobilizing against Trump, the Clinton campaign has targeted mobilization aimed at Latinos. They have brought high-profile Latinas such as Amanda Renter and Emmy Ruiz into their campaign structure too.

Trump’s commentary about immigration and immigrants targets Latinos, and his rhetoric about playing “the woman card” will not play well with Latina voters, particularly those who continue to face pay inequities and discrimination.

It is precisely the intersection of ethnicity and gender that could propel Latinas to record turnout over the course of the next few months.

Jessica L. Lavariega Monforti is professor and chair of the Department of Political Science at Pace University in NYC. Her research focuses on Latinx politics in the U.S., political behavior, and public policy.