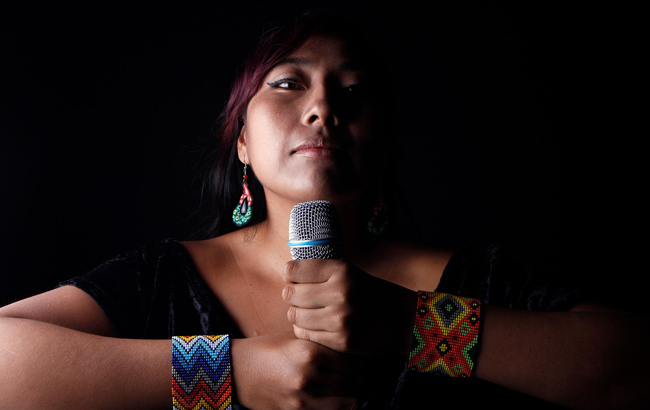 Mare Avertencia Lirika is a Zapotec hip-hop artist from the state of Oaxaca, Mexico who is redefining Rap, a genre that for some is associated with aggression, violence and misogyny.

However, for Mare, rap has become a means of expression not only of her indigenous roots but also of her feminist and socially conscious upbringing. Words allow her to claim her own history and that of the people in her community.

Growing up in a region of Oaxaca with a high rate of marginalization and emigration, Mare’s childhood was influenced by poetry of resistance which she learned from her teachers.

In a recent interview with El Universal, Mare reflects on how her own life and family struggles propelled her to be engaged in the fight for social justice.

“Being able to understand how difficult it was for a mother to take care of her children and how migration impacted my family, it made me have a sense of awareness and responsibility from a young age,” she explains.

Mare raps the truth of the conditions of Mexico – of social inequality, oppression and sexual violence towards women. Her music video “Bienvenidx” from her new album “Siempre Viva” (Always Alive) is a critical analysis of Mexico, its integration into a neoliberal economic system that only serves the political elite. It also highlights the issues of systematic violence, oppression, unemployment and forced migration.

For the fearless hip-hop artist, music has become an alternative space to awaken consciousness of her people, and to strengthen networks within social movements in Oaxaca and beyond.

Music is only a part of Mare’s activism as she is also engaged in local indigenous communities, infusing popular education in her talks and workshops aimed at empowering youth and women.

Mare is currently on tour in the United States, taking her lyrics and her progressive thinking to migrant communities. She has already performed in Santa Ana and Los Angeles this week, and is headed to Northern California. Other U.S. cities included in Mare’s tour schedule through mid-May include: Eugene, Oregon; Chicago, Illinois and Philadelphia, PA. For more information on performance schedule, visit her official Facebook page.

Mare’s story as an up-and-coming MC in Oaxaca is featured in the documentary film, “Cuando Una Mujer Avanza – When a Woman Steps Forward” (2013), by Manovuelta Films.

Can't find a way to donate to Ecuador's earthquake relief efforts? Check out this round-up of 73 fundraisers.
Comment
Guest Voz: 2016 election - the 'Perfect Storm' for bringing out Latina voters