Guest Voz: The Time is Now for Dreamers: Join the rally April 10

Wednesday I will stand on the West Lawn of our nation’s capitol with thousands of others and demand that a dream come true.

Congress isn’t Disneyland and I am not wishing on a star for Tinker Bell to wave a magic wand. It’s not that kind of dream.

Real dreams aren’t about magic. They’re about work and sacrifice and never giving up.

Martin Luther King,Jr. had a dream that his children would live in a world that judged them by the content of their character and not the color of their skin; That there would be a place for them in the country that they loved that simply offered them the same equal opportunity, as anybody else, to live their lives as far as their talents and hard work and luck would take them. 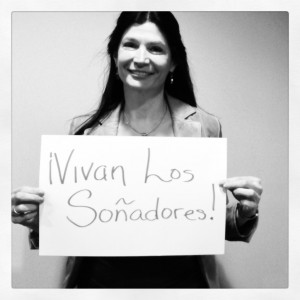 It is not by accident that the immigration movement is defined by the word “dream”. Decades of a hopeless immigration system that defies logic and which has left entire communities frightened, confused, with mothers separated from children and families often the victims of unscrupulous people who cheat vulnerable people into paying their life’s savings to navigate the quagmire of an undecipherable bureaucracy only to find they have lost every dime and no promised papers to show for it.

The impact of this broken system on our students can be seen in their eyes. And we are teachers. We look into those eyes.

Monserrat Garibay is an NEA member and a preschool teacher from Austin, Texas. When she was a child, she came to the United States with her parents but without her documentation. She was what we call a Dreamer – people who dream of becoming a citizen the United States, but because of decisions that were made for them as a child, are ineligible.

Monserrat returned to Mexico, studied hard and was able to finally return and become a citizen. Many Dreamers do not have that option. Monserrat understands the fear and the hope. 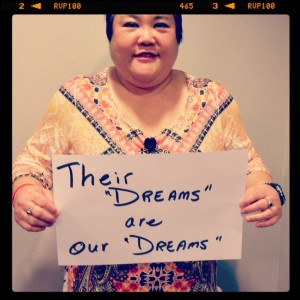 One of her preschoolers, a four year old boy full of laughter and stories and hugs, tells her about his day and his family and what he wants to be when he grows up. He’s a marvel of Show-N-Tell. But he also tells her about his fears. He tells his teacher about being afraid that his parents will be caught up in an immigration raid where they work.

He knows that sometimes when kids come home, the parents have been taken away and they come home to an empty house. He told her that his little brother is lucky that he was born here. He said, “My little brother is a gringo, so at least there’s one in my family they can’t take away.” 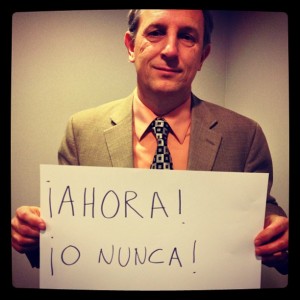 There is something broken when a four-year-old little boy is afraid of being separated from his mom and dad and baby brother. Educators will be on the West Lawn of our nation’s capitol because America is all about powerful dreams and relentless dreamers. And because we love our students and will fight for their futures. We have a dream, yes. But real dreams carry a responsibility to fight for those dreams to become reality.

If you can come to the Rally on the Capitol lawn on April 10th, come and show your support. If you can’t come, show your support by signing our petition supporting commonsense immigration reform or participating in an echo event in your community.

Wishing won’t make it happen. You will.

Lily Eskelsen is an Utah teacher and vice president of the National Education Association.

Four Latina bloggers band together to promote Latino literary talent to Latino readers and mainstream book publishers
Comment
Intrn'l Video: A place where the Amazon meets the Andes in a region preserved by time but threatened by Big Oil